Light Up The Stairs 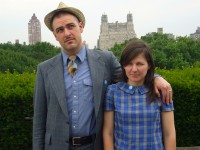 THE FOLK roots duo The Welcome Wagon, consisting of Presbyterian pastor Thomas Vito Aiuto and his wife Monique have signed to Gospel Song Records. The group's first two albums were released on Sufjan Stevens Asthmatic Kitty label. Their first Gospel Song Records album 'Light Up The Stairs' is released on 20th November. The project "continues their tradition of sacred material, while adding more songs that incorporate original lyrics. The album is an urgent, lively endeavour, largely made so by the work of producer Jeremy McDonald."