Thrive Worship: A Californian team with a pop radio approach 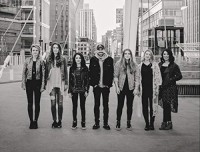 The songs "Ruins" and "Nothing Like Your Love" by Californian outfit Thrive Worship are soon to be added to the Cross Rhythms radio playlist. They are from the album 'A Thousand More' which was the highest new artist debut album released in the last five years within the Christian and gospel market. The album has received enthusiastic reviews, Cross Rhythms writing "It's a pop studio album of worship anthems with R&B and dance influences and Thrives' three core worship leaders, Corbin Phillips, Peter Burton and Charmaine Wells, all have strong pop voices. Equally impressive is the production, full of snappy rhythm tracks and clever synth embellishments."

Hallels wrote, "'Praise The Name (Ancient Doors)' combines both the awe of God and the intimacy of drawing close to Jesus together effortlessly on a solidly structured melody. 'Greater Things' sounds like a Chris Tomlin classic with those soaring choruses. . . Psalm 23 gets a contemporary and refreshing makeover with the piano-led 'All The Days'. And the lead worship leader, who has the vocal resonances of Christy Nockels and Melodie Malone, is promising." CCM Magazine wrote, "As a growing and evolving group of diverse singers and musicians, Thrive Worship is writing songs for the Church that sing of a hope for the future and love for the Saviour. 'A Thousand More' is packed with 11 original worship songs born from the vibrant ministry happening at Bayside."

Formed in January 2014 as the worship team of Sacramento's Bayside Church, the band including the three founding members brought in a wide range of musical styles. Three years after their first single "Everything" they signed with Integrity Music and released their debut album. When asked about the inspiration behind the album Corbin and Peter responded, "It just naturally happened I think when we realised we had gotten all the bad songs or at least some of the bad songs out of our system. I don't think they're ever all the way out, we were like hey, some of these songs are doing pretty good and they're working well for our church - there's probably other churches that could benefit from these. So that's the heart behind what we're doing, we want to resource the local Church across the world. We were church kids, we just loved being a part of local church ministry and so that's the heartbeat of Thrive Worship."

On the Worship Leader Probs Podcast Thrives' Corbin Philips spoke about his early days. "My parents split when I was super young so after they did we moved churches. We were at a tiny Baptist church and I came over to Bayside when I was seven/eight. I started volunteering on our worship team and honestly, one core value we have for anybody who gets involved in worship is that they learn to serve in the church and if that means getting a vacuum or wrapping cables, whatever it is, we do that. My journey was a little bit longer than that because I was an ambitious or head strong kid and so I needed a little bit more time. I got hired about nine years ago at Bayside as a tech guy and I spent the next four years making very little money and I was mixing for our youth ministry once or twice a month. During the week I was making quad boxes or fixing lights. It wasn't until four years in to working that I started getting opportunities to lead. Since I started leading it's been an amazing journey, this Thrive Worship piece has been really close to my heart. I've been writing music since I was in elementary school and there's something cool about when you get on stage and you watch a congregation be impacted by a lyric or a melody that you've helped to compose. It's so fascinating - it's hard to put in to words - so I think sometimes when you know you have a calling from God and you have the 10 thousand hours that you've put in, it's just very rewarding to see what God does because it goes beyond anything you're trying to accomplish and becomes 'we're actually making a big impact right now'."

The Bayside Church has eight campuses. Peter Burton explained in the podcast how Thrive Worship's core members have in the past been involved in leading worship at all eight. "We used to kind of jump around and worship lead at all of them then we recently have moved towards a model of being a little more stationary so we can help to build in to that campus. So right now we've got a female and male worship leader at every campus that are stationed there so for instance Corbin's a worship leader at our Granite Bay campus which is our main campus. I'm over at another campus with Charmaine called The Adventure campus and then so on and so forth. Every once in a while we'll jump around and check on the campuses and see how they're doing but for the most part we try to stick with our campus so we can really invest in that community. On Sunday nights we have a service at our main campus at Granite Bay which Corbin leads where all the worship leaders from the different campuses come together and do a big night of worship. The atmosphere at that service is just different to the others, there's a tonne of young college people who are hungry to worship. It's a really good spot for us to try new songs to experiment with stuff and also just kind of go for it more than your typical weekend service, so that's kind of what we're doing right now."