Mike Rimmer spoke at length to worship leader TIM HUGHES whose 'Holding Nothing Back' continues to be UK Christian music's best seller. 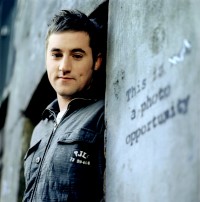 2007 has been a year for eagerly anticipated worship albums. After the release of Matt Redman's 'Beautiful News' came the release on 23rd March of Tim Hughes' 'Holding Nothing Back'. It, of course, has gone on to sell big quantities to make it one of the best selling Christian music albums in the UK. In a Cross Rhythms production studio I talk at length to this unassuming and most unlikely recording star.

I begin by observing that it's been a while since 'When Silence Falls' and Tim gives me a slightly sheepish look. "Well it's not far off three years," he admits, "so, bit slow I'm afraid. I take a long time to write songs! In all seriousness, I'm just keen to get the right songs. Obviously the focus of my songs is for them to be used in the Church. I'm not very good at churning them out too quickly. I'd rather it be that way. To be happy with the collection of songs rather than four good songs and the rest are fillers."

Tim Hughes has always been someone who is a ministry-focussed worship leader as opposed to a "worship artist" in the Nashville CCM sense. Therefore a great deal of his time is actually caught up in encouraging other worship leaders and in taking part at events and working at a local church level rather than in the act of promoting himself. Therefore moments like these when he is talking about himself or his albums are rare. He agrees, "Because I'm always travelling and holding festivals at other churches I don't tend to do the 'big album' tour. I've managed to escape that. But there is a sense of, you've really exerted yourself and you feel a bit dry. I guess, although women will probably kill me! - it's like having a baby. I can imagine that straight after, the last thing you want to do is have another baby, or even think about it. So it does take a bit of time to feel like you're ready to get creative and release an album again."

Although he doesn't generally tour, the singer/songwriter did look like he was enjoying himself when he opened up for Delirious? on their last UK tour. He responds, "Sometimes you've just got to do things and try things. I love the Delirious? guys and know them and respect what they do. I thought, actually it would be a great challenge for me to open up and actually to try and lead people in worship even though it's a different environment from some of the church services or festivals I'm involved in." He remembers, "You know there were some amazing moments where we ended up meeting with God and the sense of his presence. I absolutely loved it so it was a really good experience. A great challenge and I felt I learnt tonnes from doing it."

So were there any pop star moments with girls screaming out his name? "Not enough, no," he laughs. "No, I can't remember that." He clears his throat in a pointed fashion. He isn't the only one who has faced devoted fans when trying to lead worship, Michael W Smith still has fans who shout "Michaaaaaeeeeeeel" when he's doing one of his worship concerts. Tim observes, "Well again that's the challenge. Like John the Baptist's motto was, 'He must increase, I must decrease.' And that's my challenge. Whatever situation you're leading, however people are acting, I've got to somehow get out of the way and cause people to get caught up with God. That's always the role I need to take and sometimes it's harder than other times but you've got to keep pressing on for that."

I ask whether there was anything significant about the title. He laughs, "We always find it's really difficult to title albums unless you've got a classic song as it were. And for this one, there is a song on the album. But also it felt very much, it fitted in with a lot of the themes of the songs. I've been feeling that these are days where we've got to go for it as Christians. There's no time for apathy and half-hearted worship. I guess I've seen so much of that, perhaps in my own life and around and I just thought, right, this is all or nothing. Time to take risks. Time to worship honestly, vulnerably, passionately; everything open. And so the lyrics I hope are much more expressive, a bit more daring, bit more challenging in some ways than some of the others songs I've written. So it felt like the album title captured the songs. Then also musically I think, hopefully, it captured that sense of, 'HERE WE GO!' More full on."

The album was recorded at Hereford's Chapel Lane studios where, along with producer Nathan Nockels and engineer Sam Gibson, Tim began tracking with regular drummer Paul Evans and long time cohort Matt Weeks on bass and a certain Stuart Garrard on guitar. Nockels produced his last album so Hughes was making music that came out of established friendships. "I think that's important for music to come out of relationships," he reflects. "I think I felt I could be more free, more relaxed, more confident. So we had a great week recording there. Then we did a whole bunch of it in Nashville - vocals and overdubs. And then for four of the songs I worked with Matt Bronleewe, who's produced Leeland, Rebecca St James, Michael W Smith and Natalie Imbruglia"

Those sessions took place in Los Angeles where Bronleewe pulled in top session players like Lyle Workman on guitar, who is Sting's guitarist. There was also keyboardist Patrick Warren who's played with everyone from Macy Gray to Sheryl Crow. Hughes confesses, "That was a real stretch for me, to see these top-of-the-game professionals coming in and how they'd impact the songs and respond to them. So I learnt lots then. That was really fun. That felt like a bit of a challenge for me to really step it up. So all the different locations I think worked really well together to get the final product."

One surprise moment on the album sees Hughes team up with critically acclaimed mainstream artist Brooke Fraser for the song "Clinging To The Cross". But how did Tim hook up with the New Zealander? "My wife and I had a two-month sabbatical in Australia and we were working quite closely will the Hillsong guys and we met Brooke there. We hung out and we just loved her. She's great fun. Loved her heart, amazing voice. It's my wife who has the credit. She was nagging me; 'Look, do a duet and do it with a girl! What about Brooke?' And fortunately Brooke agreed to do it. She's just got an amazing voice and so I was really pleased. Her album 'Albertine' is one of my favourite albums at the moment. Just really classy songs. Tasteful production."

Tim goes on to speak about how the song came about. "My wife and I lead a cell group at our church. There was a girl there who was doing a little talk. She kept using this phrase 'clinging to the cross'. I found that amazingly helpful. You know that sense of desperation? That sense of all or nothing. In the world we live, there are so many ups and downs and hard things to face and doubts and questions. Just that we always have the cross to cling to as a sense of hope. Of new beginnings of life. So it very much came out of that. A sense of, through the bleak, dark times, finding our hope in Christ the Saviour."

I point out that Tim keeps using the phrase "my wife and I" throughout our conversation. He laughs. Tim got married three years ago and jokes, "Well I hope it doesn't sound like I'm TOO under the thumb! I grew up with my wife, known her all my life. So it's been amazing for me. She's my best friend. And marriage has been incredible. I think she's really helped me as a songwriter. I think in one sense, with this album and these songs, she doesn't really get credited much but she's been hugely influential. Even cheering me on. The thing I love about our Rachael, she's not a songwriter as it were but she knows what stirs her and she's constantly challenging me. Like, 'Don't say predictable tired clichÃ©s.' And 'Oh c'mon, you can do better!' Sending me back to the drawing board many times. It's provoked quite a few arguments! But it's really great for me. It just prevents me from getting stale. So I think it's benefited me so hopefully the album shows that."

Married life obviously suits the songsmith. Tim has put on a bit of weight. "HA!" he responds to the accusation, "I'm actually in the process of losing it so.hopefully! But it is a big life change. We have both had to sacrifice a lot. So we very much do things together and decide what we can do, what we can't do. What's right for now and what needs to be put on hold."

One of the biggest challenges for newly weds is remembering to consider the other person when making decisions. This sometimes takes a little while to sink in. Tm was no exception. "The worst was actually when we moved house and I arranged to be in America so she had to move house on her own! We had some SERIOUS chats then! But then again it's the same for her. She has to remember me. It's just a partnership isn't it? And working it through together."

One of the songs that immediately leaps out of the album and feels a bit special is "The Highest And Greatest". Surprisingly it's a rare co-write with Hughes teaming up with London-based worship leader Nick Herbert. "I hadn't done that much co-writing before," Tim explains. "Nick came to me with this song idea. It had a very hymn-like feel to it. I think he'd taken some lines from hymns. I really liked it but I just felt it needed a chorus and some bridge sections. We worked on it together. I think it's such a strong line, 'You are the highest, you are the greatest.' We tried to keep that hymn-like feel. It's anthemic. So that's how the song came to be."