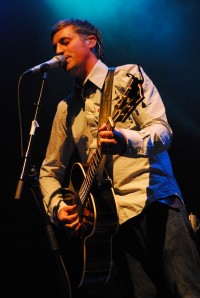 Last September saw the Shepherd's Bush Empire turned into a church for the evening when around 2,000 people gathered together for the live recording of Tim Hughes' new album 'Happy Day'. The event (part of Worship Central, a ministry which Tim heads up out his church, Holy Trinity Brompton (HTB) in London) was recorded live on CD and DVD and was Tim's first ever live album. I met up with him at HTB as the final mastering and edits were being completed on the CD/DVD, released by Survivor, to find out what he felt about the evening, the resulting CD/DVD and also about his recent experience as part of the CompassionArt project.

Clem: The new album is titled 'Happy Day'. Why did you choose that as the title?

Tim: Well it's the title of one of the songs on the album of course. We're trying to capture the sense of celebration, of a live event worshipping God, and this song seems to be one which has connected with people. The idea of the album was to have six songs which are already known, but to get great live arrangements of them, and six new songs. And so it felt like 'Happy Day' just held that theme of celebration all together.

Clem: How did doing a live album compare to doing a studio album?

Tim: It was an amazing experience and very different. In a studio you get time to get things as perfect as you can. Here we basically had one night to record everything which immediately brings a new level of pressure - and that's great too. There was also this sense of three things going on at once; recording a live album, filming a DVD of the event and wanting it to be a great night of worship for everyone who came along.

Clem: What is the process of preparing for an event like this - putting the band together, rehearsals, track selection and the like?

Tim: Well it started with trying to work out, with Les Moir (Survivor Records), which songs to use. We had six new songs - one of them a new arrangement of "When I Survey" - but then we also had to decide which songs from previous albums we wanted to use. It's quite fun trying to work it out, even if you do want them all in there really. In terms of getting the band ready we had some great musicians from America as well as guys from the UK who I regularly work with. Nathan Nockels, who produced the album as well as playing keyboards, pulled the band together. Remember we only had one night to get it right and you don't want to have to do too many re-takes.

It was great just getting in the rehearsal studio and really going for it, working on arrangements. For instance, with "Here I Am To Worship", what could we do differently? So it was a really fun, creative environment and we worked really, really hard. We spent five days rehearsing solidly and got to the point where we knew the songs so well that we could be fully focused on worshipping God together at the live event rather than desperately trying to remember the right notes to play. But suddenly it's a live event with 2,000 people and everything changes; adrenaline kicks in - that's when you remember that all the preparation and rehearsal were worth it.

Clem: How well do you think the CD and DVD have captured the evening in Shepherds Bush?

Tim: I really think they have. I feel really, really pleased. Visually we've tried to create something in the DVD that will inspire people to worship rather that just watch a film of an event and I think the DVD does capture the passion of the evening. It's great to look back at the DVD and see people worshipping - the energy and excitement that was there. With the CD it is amazing listening back and hearing the crowd singing; it really does feel like we captured the night.

Although there were some new songs we had put them up as MP3s on the Worship Central website so people could learn them and I also 'taught' them beforehand, so it wasn't like everyone was struggling to learn new stuff. The opening block of worship was followed by Mike Pilavachi who spoke brilliantly on God's heart for justice and how that links in with worship. Then we picked that up in sung worship again and finished with the empty cross. We only had to re-do a couple of songs after the whole thing had finished which hopefully didn't break into the sense of being there as worshippers rather than at a recording.

Clem: Which of the songs on the album are 'stand-outs' for you?

Tim: Well I'm really pleased with "Give Us Your Courage", which has come out of a journey we have been on as a church at HTB. Nicky Gumbel has often preached, using this phrase, on how, in our walk with God, life is often a series of ups and downs, great joy and great tragedy too. So it's a song which tries to capture that sense of 'God give us courage to serve you' in the good times and the bad.

There's also "We Won't Stay Silent", from the 'CompassionArt' album, which is a song of intercession. The idea of worship and prayer being linked is something which I think we in the church need to recapture - that we are singing our intercessions to God. So I feel that song with the words "teach us how to pray" might hopefully impact out prayer life corporately.

Hi, What would be the best way to contact Tim Hughes to bring him to do a Concert or 2 in Merthyr Tydfil at some point. There is much excitement in our town after a very successful Teen Challenge event in our new leisure centre which attracted over 600 people. I would love to bring Tim Hughes to our Town and the Churches are working well together these days- God bless you- Terry