Tony Cummings spoke to London-based singer, songwriter and guitarist TINA BOONSTRA about her life and music 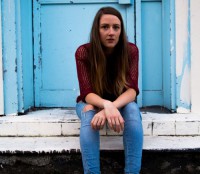 If you're going to the Big Church Day Out this year, there's a good chance that you'll catch an electrifying performance by one of the best new singer/songwriters to have emerged in recent times. I'm talking of Tina Boonstra, from London, whose superb 'My Concrete Heart (Will Beat Again)' EP is out now through 7Core Music. With Cross Rhythms Radio currently playing her songs "Only A Human", "Concrete Heart", "Occupy" and "Prodigal" and listeners enthusing about her haunting blend of folk-tinged melodies and sparse electronica, this exceptionally talented 29-year-old singer/guitarist is clearly going to be around for the long haul.

Tina was born in Burnley, Lancashire, but her parents were missionaries so she grew up first in the Netherlands, then in South Africa and then back in the UK when she was a teenager. She spoke about the culture shock she felt back in the UK during her teenage years and how she found songwriting was a way she discovered of processing her thoughts and feelings in the confusing tumult of the modern world. She explained, "I started writing songs when I was 12 years old and always thought that I'd write songs for church. That was the world I was in and it wasn't until a few years down the line that it didn't feel like there was an opportunity to do that. Instead of getting frustrated and feeling like I should just stop writing, a friend of mine suggested that I started performing at open mic nights and acoustic nights in and around London and through that I rediscovered my love for songwriting and storytelling and I felt really challenged to write for those people where they're at."

Tina always felt drawn to a storytelling approach to songwriting. She said, "People really value honesty and credibility and stories. So actually, I think it helped me to be a better songwriter and it played on the aspect of songwriting that I really loved. Perhaps when I was very focussed on writing songs for church I'd forgotten about that, and it had limited my creativity. And having a slightly bigger playing field, fewer rules to follow meant that I had a lot more freedom in my writing and I think that was a good thing."

In 2014, as Christina Boonstra, the singer/songwriter recorded a single, "Don't Hold On", and an EP, 'Until My Feet Move', with Manchester-based producer Dan Stirling. Dan today works with the renowned worship team Rivers & Robots. Said Tina, "The song 'Until My Feet Move' was about moving out of passivity and actually starting to do something, starting to try and that's the reason we called the EP that. For me, at that moment, I was starting to try; persevering and not giving up. That was where I was at. All the songs were just a picture of what I was going through, what I was thinking about and what my friends were thinking about at the time. That EP really spurred me on to start trying out performing; doing gigs in clubs and open mic nights and that was a great thing for me. It helped me to develop my performance and my musical abilities, and it really challenged me. It's one thing writing songs in your bedroom, but it's a whole other thing performing them live in front of people." 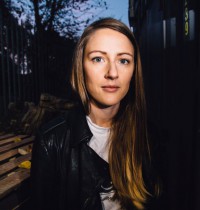 The big breakthrough in Tina's still developing music career came in 2017 when she met Trevor Michael at a songwriters retreat. Over the years, Trevor has produced many of the most successful artists in the UK Christian music scene and runs the UK's pioneering independent record company, 7Core Music. Remembered Tina, "I was introduced to Trevor by the worship leader Ian Yates who I sort of knew a little bit through my time living up in Liverpool. Trev and I got on quite well. We didn't really talk about my music when I first met him, we just had a good chat about Brexit and just joking and laughing about the conference we were at and I felt like we got on quite well. Towards the end of the event we exchanged contacts and I emailed him afterwards saying that I was hoping to record an EP. I'd been trying to find a producer to do it. I had a couple of people that I had started to work with but it didn't really work out and I sent him one of the songs to ask for his advice. He seemed to quickly understand the sound I wanted to go for. He heard the music in a very similar way to the way I did and he offered to help me record it. To my surprise he wanted to do that and so we chatted a bit about how we'd met up in Eastbourne and then we had a date in the diary to record. It was quite surprising. One thing I loved about working with Trevor is he just seemed to understand the sound I wanted to create from the very, very rough demo that I sent him."

Tina continued, "When I started talking to Trev about the songs, I had recorded some acoustic stuff and talked about doing a bit more electronic stuff as the process evolved. Before I met Trev I knew that I wanted to do something more alternative sounding. Because I wasn't performing with a band at the time, I didn't want to try and create a very big record. I thought it was too risky and it wasn't really where I was at as a songwriter and musician. So those elements were kind of in my mind but then the bands that Trev was recommending to me as guide tracks were really along the same line and trying to capture that quite raw, stripped back alternative sound. So it wasn't about a big wall of sound. It was much more inspired by artists like P J Harvey and folk. And Trev managed to put into words the vision that I had in the back of my mind. So by the time we got to the studio we were very much on the same page in making this quiet, restrained record which was also more electric focussed than acoustic."

The first single released from 'My Concrete Heart (Will Beat Again)' was "Prodigal". Said Tina, "It's inspired by the story of the Prodigal Son in the Bible and the EP kind of, I see it as taking a journey from being in a place where it is a kind of desert land, feeling quite numb and hard-hearted when it comes to the connection with the love of God and moving towards a sense of closeness and softness to his love and experiencing that afresh. But it's only inspired by one tiny bit of that story which is the verse that says 'And he came to his senses.' It's about that minute of turning around. Lots of the songs aren't about the breakthrough happening but more about building faith that love will come, love will be restored and hearts can be healed in time. I live in a city full of very ambitious people and being quite driven, wanting to achieve things in life and actually with the best intentions wanting to pursue what I thought God had asked me to do and really working very hard at it, but I ended up with a sense of tiredness and coldness. It's more like slowly losing the joy that maybe I once had in my work, and in my life, my relationship and my understanding of my faith and with the love of God. And, it's that sense of coming a bit closer, creating space in my mind, in my life, in my heart, to reconnect with that warmth of love again. That's what I really wanted to capture in this EP and in these songs."

As well as Big Church Day Out North and South, Tina will also be playing at Latitude in July and KingStock in August, as well as the event The Curious Arts Festival. Despite all her creative efforts, she is still some way from making a living from her music. She said, "Music has changed quite a lot over the last few years. I love writing music and I want to place a value on that, whether it's commercially successful or not. I read this really encouraging book last year by Elizabeth Gilbert who is an author. She wrote Eat, Pray, Love. It's called Big Magic and one thing that really stood out to me, she talks about her creative process and how she really encourages creatives not to hang their finance responsibilities onto their creativity and how that can actually be a burden sometimes. Sometimes it's great that it does pay the bills, and that's exciting, but I think for all musicians and all creatives it is important to remember that even if creativity doesn't pay the bills, it doesn't mean that it's not valid. We need to remember that small is okay. A little bit of yeast changes the dough and sometimes a whisper is more powerful than a shout. I think I tend to lean towards thinking that bigger is better. But sometimes that's not the case. Choosing your moment, choosing your words, holding back can be more powerful than saying everything all at once."