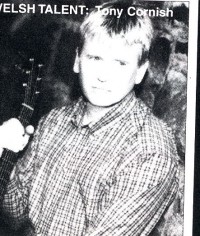 One of the truly outstanding songs on the debut album by Wrexham-based singer/songwriter Tony Cornish was written about the harrowing subject of Dunblane. "I wrote it the day after the Dunblane massacre," remembers Tony. "My wife Judith was on her way out but I insisted she come and hear the new song. Before I began I told her, 'I've got it all save for one line.' When I came to that part Judith said, 'It's almost as if God was saying, "The first heart that broke today was mine.'" It was an incredible insight. People continually say, 'If God is a God of love how can he let these terrible things happen?' And yet God was revealing his is the first heart to break."

Hailing from Llangollen in Denbighshire, 37-year-old Tony is married to Judith and has three children - Sarah, Kate and William. A worship leader at his local church (The Community Church, Llangollen), Tony has been playing guitar since he was 12 and songwriting for the past four years. In between Tony had a spell as a pro musician in Australia. "I lived a very fast lifestyle, drugs, booze. Then one morning I woke up and told the band I was with that I was returning to Britain to study to be a teacher. They were appalled."

Four years ago Tony came to faith in Christ. Very soon he was writing songs. "I knew they weren't for worship. Then, as I became aware of the Christian music world, I began to see the potential music has in evangelism. When I play a song like 'Remember Lazarus', which I wrote when I was struggling with depression, I see it really connecting with people. They say, 'yes, I get depressed too.' But there is hope."

The fact that Tony's album is truly a quality release, let alone that it exists at all, bears testimony to the grace of God. The first offering to come from the independent Broken Records house, money was not in abundance. Yet through perseverance, prayer and talent plus the inspiration of his producer Steve Brooke, the album is now available and Tony is keen to extend his musical ministry. "I have a heart to take the Gospel into prisons. I'm trusting God to open up doors in that area in the future. New songs are also coming thick and fast. I've written 70 or 80 and I'm planning to release an EP in the spring." If Tony's songwriting craft continues to evolve in the way it has done, this second release may well become a classic.