Twenty One Pilots: Rock, rap, dance eclecticism for the broken

The latest Cross Rhythms radio hit for the best-selling electro pop rockers and rappers Twenty One Pilots, "Heavydirtysoul", is the latest from the duo's smash hit album 'Blurryface' which, as their growing legion of fans will know, entered the American album charts at number one on its release in May. Like Paramore, OneRepublic and a growing list of other acts, Twenty One Pilots have chosen the path of mainstream music without carrying the baggage of the "Christian music" tag. The band, consisting of Tyler Joseph and Josh Dun, formed in Columbus, Ohio, in 2009.

Twenty One Pilots may not be considered a Christian band but they certainly get some thought-provoking content into their lyrics. One critic suggested that the track "Heavydirtysoul" "feels more like a Calvin Harris dance track than a Twenty One Pilots poem" over which Tyler first rasps that "death inspires me like a dog inspires a rabbit" before asking "Can you save, can you save my heavy, dirty soul?" Tyler, of course, knows the answer.

The duo's two independent albums 'Twenty One Pilots' and 2011's 'Regional At Best' got the whole ball rolling for the team and in 2012 they were signed to Fueled By Ramen. Their first for that label, 'Vessel' (2013), became a national hit and was nominated as Album Of The Year at the AP Music Awards. The liner notes of 'Vessel' indicated the duo's spiritual roots with them thanking the "supportive family at Five Fourteen Church" and also "thank God for sending his Son and being a part of this even before we were."

Twenty One Pilots are skilled at connecting with the thoughts and feelings of a mass audience. Christian writer Damien Ference commented, "They know that young people are lonely, hurting, depressed, confused, searching, distracted and restless. And they know that when young people turn to music, either live or recorded, they are looking for something more. Joseph and Dunn know what it is - or better yet - who it is that young people are looking for, but because of the culture's hostility to the Gospel, they've got to be cunning in leading their audience toward the answer. If they came right out and said it, they'd lose their audience. Remember, Twenty One Pilots play music to make people think. They want to lead their audience to the answer, but they don't want to force the answer upon them - they want their audience to discover the answer for themselves." 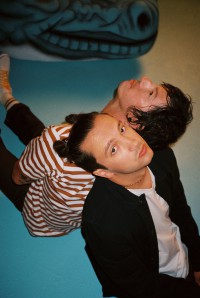 With their rock, rap, EDM mashup the duo have evolved an exhilarating yet thought-provoking musical concoction. 'Blurryface' is a concept album about the war that rages inside, and Twenty One Pilots concerts are, as critic Chris DeVille described, "basically that conflict blasted to the size of a Gladiator match, the audience cheering on as the band battles their demons. . . The words tell a story as complicated and messy as the music; doubt and despair commingle with bold self-assurance."

It's a song on 'Vessel' which shows Twenty One Pilots' perspective on life. Although God is not named, "Screen" is, like "Heavydirtysoul", a song directed at him. It begins with the lines, "I do not know why I would go/In front of you and hide my soul/Cause you're the only one who knows it" and ends with the admission, "We're broken/We're broken/We're broken/We're broken people." For those fans relating to such confession, it is to be hoped many will find the healer of their brokenness.