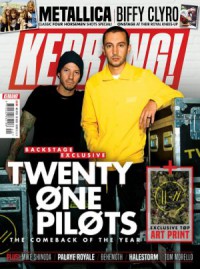 THE 23RD MARCH issue of Kerrang magazine has published a six-page cover story on mainstream phenomenon Twenty One Pilots. The article, subheaded 11 Days In The Life Of Josh Dun & Tyler Joseph, was written by Emily Carter. Said Tyler in the interview where he talked about getting ideas for songs and arrangements while in concert, "I'm always writing. I think it's invaluable to step off of a stage in front of that many people and taking that inspiration and uplift of energy that you get. It would be a shame to not at least give it an opportunity to breathe into a new idea. We're not sure what our strategy is, except that while we're touring, we're going to make sure that we have a basin to catch all of the cool ideas that may come to us as we're performing."