Tyrone Wells: The songsmith singing "Running Around In My Dreams" 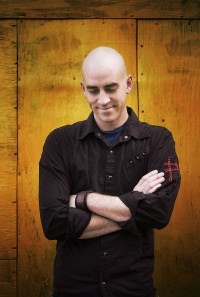 Cross Rhythms' recent turntable hit "Running Around In My Dreams" by Tyrone Wells is more than a delightfully catchy piece of acoustic pop about a hopeless romantic instantly smitten by a young lovely. It is also the return to Cross Rhythms radio of a talented singer who had previously made the CR playlist with the song "Here Come The Bugs" through the unlikely means of a dance remix of pop rockers Skypark - a band Tyrone had once fronted. Clearly Tyrone has quite a story to tell so I recently quizzed the Spokane, Washington-based singer/songwriter to learn it.

One of five children born to a church minister, Wells experienced a conservative upbringing and while he was exposed to the music of his church choir, he was discouraged from listening to pop and rock music. Then, when he was in junior high, he heard Stevie Wonder's pop sensation "I Just Called To Say I Love You", and his live was instantly transformed. "I thought, 'Man, I really like this,'" Wells said. "I didn't understand the scope or power of great R&B at the time because I hadn't been exposed to it, but when I got older, I started eating up all this stuff from The Commodores to Marvin Gaye and it was really inspiring."

Around the same time, Wells discovered pop and folk performers like Simon And Garfunkel and Damien Rice, whose storytelling style rubbed off on Wells and encouraged him to use his songs as tools to communicate with his audience. He said, "I don't presume to be a teacher, but I feel like a lot of pop music is not necessarily truth, and I want to be a communicator of what I perceive to be truth."

As a teenager he moved to Fullerton, California, to attend college and soon joined the Christian rock band Skypark as the lead singer. Skypark, consisting of Tyrone (vocals), Joey Aszerbaum (guitar), Tony Deerfield (bass) and Keith Grove (drums), were soon gigging around the Orange County area. After independent releases 'Disorder' (EP) (1994), 'Live In Room 104' (1995) and 'One More Night With The Frogs' (1996) the group were signed to Christian major Word Records. The resulting albums 'Am I Pretty?' (1998) and 'Overbluecity' (2000) brought forth the suggestion from Phantom Tollbooth that Skypark sounded like "a funked up Pearl Jam with bluesy vocals." Whatever the accuracy of such a description 'Am I Pretty?', produced by Thom Roy, featured "My Mirror" which referenced The Black Crowes, "Here Come The Bugs" which, before its dance remix makeover sounded like a psychedelic Lenny Kravitz, and "Starbucks Girl", a charming little song about a crush on a cafÃ© employee on which Wells sang, "This could be love.or maybe it's just really good coffee."

'Overbluecity' was produced by Ed Stasium, known for his work with The Ramones and Living Colour. One standout was "The Girl In Your Picture" which finds the singer comparing a real life acquaintance with the fantasy image he has constructed of her ("You're much nicer on Kodak paper/You're always smiling at me") while "Overbluecity" has the unlikely guest Maire Brennan cropping up to duet with Wells. But despite their undoubted quality neither of Skypark's Word albums produced a breakthrough Christian radio hit and the group disbanded in 2001. Looking back on his days with Skypark Tyrone mused, "I have very fond memories of those times. All the boys in Skypark are still some of my favourite people and best friends."

In 2005 he released the 'Close: Live At McClains' album. Also in 2005 the singer/songwriter set about on working on his next full-length, 'Hold On', revisiting songs he had been writing during the past two years. Wells' big break came in 2007 after performing at the National Association Of Campus Activities Convention in Boston.

The NACA appearance was a massive breakthrough for Wells. After the performance he set the record for the convention in receiving 152 offers to come and play. He was also snapped up by the world's largest record company, Universal Records. The music giant re-released his 'Hold On' True America album. Produced by Chris Karn and Marc Ford, 'Hold On' was a full band album and demonstrated that Wells had developed into a masterly songsmith. The standout song on 'Hold On' was the album's single, "What Are We Fighting For?". Said Wells, "I was watching the news and was just overwhelmed with all the death. And as I wrote the song, it started to take on its own life. I was thinking about people, communication and loving each other and then the rest of it just came out. It addresses some important questions and I think that's good. I'm not going to be one of those people that's always waving my fists because I'm not that way. But I do want to share what my life experiences have taught me because when I feel like I've communicated something to someone in the audience, that's when I feel the magic."

In 2008, with a Universal recording budget at his disposal Tyrone began to "open up the process" in recording and travelled to London to work with a circle of songwriters/musicians who aligned with Wells' musical direction. Said Tyrone, "Half of the album was done in London and the other half completed here in the States. I didn't know what kind of record I was going to make before I got to London, but something just seemed to click while I was there that really defined what I wanted to do with this album." 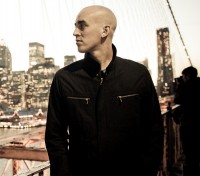 In the UK Tyrone worked with songwriter and producer Martin Terefe (Jason Mraz, K T Tunstall) and Greenbelt favourite and occasional Snow Patrol co-writer Iain Archer. Wells spoke about working with the Irish songsmith: "We've written four songs together. Two have already been released. The songs, 'This Is Beautiful' and 'Remain', came out on my last full length album. Iain and I wrote them together while I was in London writing and recording for that album. One of the other songs we wrote will be coming out on my upcoming release. It's called 'Slow Me Down' and I really love the song. We wrote 'Slow Me Down' in my living room in Southern California."

The American contributors to 'Remain' included Tim Myers (formerly of OneRepublic) and David Hodges (formerly of Evanescence). Tyrone particularly enjoyed working with Martin Terefe. "We had great chemistry together," he enthused. "Losing Ground", one of a handful of production/songwriting collaborations between Wells and Terefe, was written and demoed in less than three hours during their first writing session together.

On its release 'Remain' reached 17 in Billboard's Heatseekers charts. The first single from the project, "More", reached 13 on the Triple A radio charts while the second single, "Sing Or Swim", was used in promos for the Grey's Anatomy hit TV series. On 2nd May 2010 Tyrone's EP 'Metal And Wood' was released. Going back to his acoustic roots, Wells aimed at bringing back a folk vibe that can be found in his earlier albums 'Snapshot' and 'Hold On'.

Tyrone admitted he thoroughly enjoyed recording 'Metal And Wood'. "The EP was low pressure. I wasn't concerned about delivering a single to the label because it was an independent release. And with that came the freedom of not being concerned about 'the suits' at the label."

So was his "Running Around In My Dreams" turntable hit written about a particular young lady? "No. That song is make believe. but I love my wife and she goes running around in my dreams."