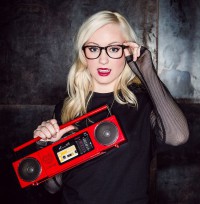 When Nashville's independent Inpop Records signed V.Rose last year, they knew they'd landed a very special artist. Enthused Inpop's president Mark Lusk, "V.Rose is not your typical artist. She combines hip-hop, pop, dance and worship into one record. . . To see where God has brought her as an artist and as a woman of God is incredible. We believe her music and testimony will touch millions of people and we can't wait for the world to hear it."

In fact quite a few people have already heard some of V.Rose's music. Her 'V.Rose' album from 2011 produced the Cross Rhythms radio hits "Not So Average" and "Battlecry" while a legion of hip-hop followers have appreciated her guest vocals on projects by Flame, CJ Emulous, Trip Lee and others. V.Rose was born Vienna Rose Dare in Sacramento, California on 9th August 1989. Even at the tender age of six she was singing in church and two years later was writing her first songs. In her teenage years Vienna and a childhood friend started a group called Harmony and by the age of 16 V.Rose's prodigious singing talent was spotted by the mainstream pop industry. She remembered, "When I was 16 I got offered a deal to sign with Sony Records. I was like 'absolutely not!' I just knew I wanted to do Christian music and I still feel the same way. I know that God has given me this gift and that I want to use it to glorify him alone. So I'm definitely adamant about that."

Wasn't it hard turning down a record contract that most singers can only dream of? "Actually it wasn't because I think I was really naive about the whole industry side of things when I was younger. So I didn't really even know what I was turning down, I just knew it wasn't for me. In that sense I just had faith that God had something else for me and that wasn't it. So I was like no, that's not it. But thank goodness that I did because that wasn't the direction I was supposed to go."

So the naive young singer/songwriter signed with Christian hip-hop producer SPEC and in 2007 her debut album 'As Herself' was released on Spechouse Media. The album didn't register though gradually Vienna was becoming a guest singer-of-choice on several Christian hip-hop projects. Finally in 2011 the St Louis, Illinois-based rapper Flame signed V.Rose to his emergent Clear Sight label and her second album 'V.Rose' was released. As it turned out, the Cross Rhythms radio stations picked up on the project ("Not So Average" being particularly popular with younger listeners). In February 2013 Clear Sight tried again with 'V.Rose', re-releasing the album with a bonus disc as 'The Electro-Pop Deluxe'. But it was only in May 2014 with the label's release of 'Forever After' that the singer's infectious blend of pop, dance and hip-hop finally saw some chart action with the album making 28 on Billboard's Christian music chart.

V.Rose explained how she came to be signed to Inpop. "I believe Inpop's A&R people were looking for new artists and I think they saw or heard about me through one of the festivals I was performing at a few years ago, Creation Fest. So I guess they started looking me up and seeing that I had a lot of good social media numbers so they started watching my videos and I think it really piqued their interest. They reached out to my management and we started having conversations and I ended up going to Nashville. I was very nervous at first, didn't know what the situation was going to be, if they were going to try to write all my songs and take all the control away and that was something that made me nervous. But when I met them they were like 'We really want an artist that will partner with us' and I was like 'Yeah, that's what I want,' because God's already shown me the vision for my music and my career in a sense and so I was really excited that they didn't want to do everything, that they wanted to partner with me. That was really what made me want to sign with them." 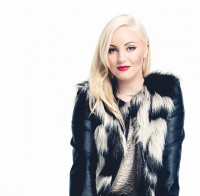 In October 2015 Inpop released the singer's 'Hearts Up' EP and on 22nd April came V.Rose's eagerly awaited full length album 'Young Dangerous Heart'. Co-produced by SPEC it is unquestionably the singer's most appealing and accessible album so far. She spoke about the album's title. "I just wanted to write about my own personal experience of my transition between being a teenager and becoming a young adult; the struggles that I faced trying to find myself and also trying to follow God above everybody else and above all the other influences around me. There were so many people telling me 'you need to do this, you need to do this'. And it was very hard for me to block those people out but eventually I was like 'God, who am I? What am I supposed to be doing?' And I just followed that plan. To me, my heart was in a very vulnerable place so that was what the title YDH came out of."

The first track on 'Young Dangerous Heart' is "Take A Broken Heart". So had the singer's heart been broken? "Several times throughout my life. I actually wrote most of that song. It was about my first heartbreak, I was 15 and I never really had experienced heartbreak before so I never really knew I could feel that way, it could hurt that bad. And I remember not having anyone to talk to about it. I couldn't talk to my parents and I remember being alone in my room and I was in so much pain emotionally and I had no choice but to just surrender to God and to say, 'God please take this pain from my heart.' I remember when I prayed that he did and I felt his peace come over me. So that's what really inspired me to write that song."

The track on the singer's album currently making waves and getting airplay is "I Love You So Much" which features rapper Trip Lee. Explained V.Rose, "I think it's sort of a new style I've been doing. It began on 'Am I Trending' on my last record and for 'I Love You So Much' I sort of went further and more hip-hop and that singy vibey sound. It's just talking to God saying, 'I love you for not leaving me, for always being there for me, just letting him know, no matter what happens, no matter how much people try to say that you're not good for me, or that you're not real or all of these things, none of that matters to me. They are not going to be able to take you away from me and I love you so much.' I think as a kid, even as a young adult I'd relied so much on God's love and really when nobody else was there for me I've always known that God's love was there for me. So even though it's a fun, vibey song, I'm really passionate about that concept. Of course Trip Lee killed it and definitely brought a different aspect to the song talking about how saying you love God just isn't enough. You have to show through your actions your love. And again that brings us back to talking about personal relationships. It's a really cool song. I think fans love it, I love it."

With V.Rose having guested on several hip-hop projects Trip Lee, Derek Minor and her old record label boss Flame have contributed to 'Young Dangerous Heart'. Said Vienna, "I'm pretty much friends with all of the major rappers which is really cool. But the difficulty I ran into was you have to catch an artist when they're not working on an album and when they're not on tour. So it's not a matter of will they do it, it's a matter of can they do it. I definitely wanted to feature with Andy and NF but there was a lot going on with those guys. But I was super excited for the features that I got and I'm super happy with Trip Lee, absolutely killed it; Flame, of course my fans were like 'you have to feature Flame' - it's become a V.Rose album thing. I was really excited to work with Derek for the first time. I loved what happened."

Also guesting on the project is Angie Rose who V.Rose laughingly explained is no relation. "It's so funny though people keep thinking that. She is an emcee from New York. I haven't worked with a lot of female artists before so I was excited to work with her. We did a song called 'We're Girls' so I thought it appropriate to feature a female MC. She absolutely killed it. She is an up and coming artist everyone should definitely keep an eye on."

Another outstanding track on the album is "Fairy Tale Ending". V.Rose spoke about the song. "I'm from California, I was born and raised in Sacramento and we are very big on the weather there and how beautiful it is all year round and I think that is the one big thing we have. I wanted to write a song that sort of showcased that along with God's love and to me that's how God's love feels. It feels like California weather, you can ride with the top down and the beautiful palm trees and the sunset. I know that no matter what they can't take him away from me. That's what that song is about. It says I was lost in the beginning, now you've found me it's a fairy tale ending. And of course, being with God is the ultimate fairy tale ending."

Its great to have music artist who are finally noticed by there great work as christians..amen