Accompanying prophet/Bible teacher Tom Brock on his recent sojourn to Europe was Swedish singer/songwriter VIOLA. She spoke to Trevor Kirk. 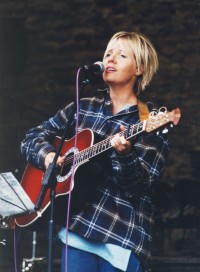 Think of Sweden and what comes to mind? Perhaps Volvos and Saabs if you're a car enthusiast; international sports stars like Bjorn Borg, Mats Wilander and Jesper Parnevik. If you're into music, one name stands out above all others - Abba. For CCM enthusiasts, recent years have produced the two sets of brothers, Lasse and Bertil Edin and Simon and Frank Adahl, known to all as Edin-Adahl, and the Eurovision-winning Carola come to mind. Now Christian music must note a new name from the land of blond-haired, blue-eyed people (and she has both) - Viola Grafstrom, but as seems to be the habit with the Swedes something shorter is called for, so she is known merely as Viola. She lives a long way from her birthplace, because she is part of Tom Brock's Wave Of Life Ministries team in Hawaii and as Tom was at the Cross Rhythms Festival, he brought Viola with him. Her powerful Holy Spirit anointing and crowd pleasing way with worshipful self-composed songs attracted the attention of Kingsway Records who are this month releasing her debut album. I began by asking Viola what were her major musical influences.

"Actually when I was younger," Viola began, "I used to listen to Donny Osmond and Cliff Richard and I really like Roxette. Mostly, I think I'm influenced by black music, I like soul music and I've listened to (traditional) gospel music for a long time." I wondered how her influences came through on the album, although looking at the songs on it the composers include some of the best in CCM, Lenny LeBlanc, Geoff Bullock and Darlene Zschech. Viola told me that this was in fact her very first recording project. "When we were in the studio doing this album, God was really there and he touched us. I came to Hawaii seven months ago and I'd only been there three weeks when we started recording, so the production was done very fast - we were only in the studio three days!" Good grief, I thought, some people take more time than that to lay down a backing track for one song!

"Anyway," Viola went on, bringing me back to the job in hand, "we really believe the anointing is there, and it's amazing how the Lord brought all the musicians together, and the music as well - six of the songs are originals - and I'm really happy to see how in such a small amount of time God can create something like this. I'm very pleased."

I asked her to tell me about one of her songs, "Let Me Be There Too". "This song really speaks to my heart," said Viola. "Christians today have to come back to the reasons why Jesus came - he came for the people, he didn't come to build up a religion or anything like that - I feel that sometimes Christians try and perform, we try to be kind of religious and build up a religion, our own religion. I feel we need to come back more and more to a relationship with God. But also, we need to build up a relationship with people, and we need to understand that the Christian faith is not something that we "perform" on Sundays, it's actually a lifestyle that we're supposed to have every day. If we could understand that, I believe that maybe people out there could see God. At least for me, I saw God not by words, but by his power, and by people, by their actions, by their loving me; and I think we need to go back to that, because that's what Jesus did. He went out and he loved people, and that's why I wrote the song. I was tired of that sort of Christianity where we always give people just words, and we think we're really spiritual, and so on. I think we need to take time to walk down the road and be with people; we don't need the answers always, but we need to walk down the road."

Several times over the Cross Rhythms weekend I was able to hear how Viola "walks down the road" in her music; listening to "Let Me Be There Too", the chorus says, "I know there's a God who can comfort/Someone that can ease your pain/I know there's a God who can comfort/But let me be there too/Let me be there too." Viola explained her role in Tom Brock's set up in Hawaii. "We run schools there, we train people in outreach, we also build up the Church to make people aware of the gifts that they have and make them a stronger Church. We try to reach out both to the world and to the Church as well. We run a Praise And Worship school and apart from all that I guess I shall be doing a lot of touring around the world."

Viola made a big impact at Cross Rhythms and now her debut album will undoubtedly extend her ministry. "I'm not a stage person, I would not choose by myself to go out there. But I know that God has chosen me to be more than an entertainer. People can't live without the living God and my music reflects this."

i am searching for her song "Unfailing love" but i cant find it over the internet.

part of the lyrics says:
"each time i fall He sets me free
i'll always be in need of His Unfailing love"