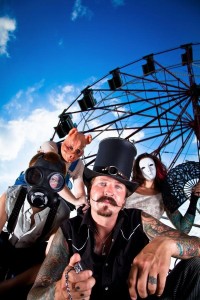 The Church in the West is currently undergoing a crisis, yet it's one seldom addressed or discussed. Half of all Christian men use Internet pornography. Some experts even claim that pornography is the main reason why men are leaving churches in their droves. Internet pornography is now a tidal wave sweeping through the world. According to figures published by the US Justice Department in 1999 there were 28,000 X-rated websites. Within just three years this number increased to 280,000. At the last count there were 4.2 million. And according to Microsoft, 60 per cent of all website visits are "sexual in nature".

One crusading music-cum-theatre act addressing the blight of pornography are a two-man, one woman group from Fort Smith, Arkansas called White Collar Sideshow. The first time I spied White Collar Sideshow they were entering the Nashville Convention Center in full stage gear and causing heads to turn as they walked past. There was T D Benton, the ring leader of their live performance. Then there is Veronica Benton who is the faceless woman and Philip Wells who is the mask, actually two masks, the pig and gas masks.

Musically, there are two drummers and a bass. All the vocal parts are done with samples from horror movies and we have a video that goes through each part of the show to tell the audience what is going on. T D explains, "We use big saw blades, beer kegs and aeroplane engine parts and have symbolic characters that portray the message of the performance. Dr Jekyll and Mr Hyde: who you are in public and who you become when nobody is looking. The messages are based on hidden addictions in people's lives and adult themes, pornography and how they turn your heart into a swine, or more of a pig. The faceless woman is about how some people focus on lustful passion, rather than building a relationship with eyes or heart."

White Collar Sideshow are not a conventional band, as T D explains, "It's more like a Broadway show with symbolic characters. Veronica's character is in a nine foot 1960's go-go cage to show how people view women. Philip's character is very intimidating. But that's what we do. We are obviously not a big radio thing; it's more like a Nine Inch Nails performance."

Listening to their tracks you can tell there are a couple of drummers in the band, because they are very rhythmic. But T D isn't a conventional drummer. He says, "I use a big two man saw blade for some solo stuff, I use aeroplane engine parts and tyre rims. Phil is more the actual drummer. He does all the work, and I just play on top of what he is doing!" 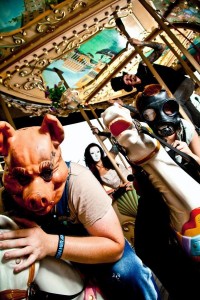 Meanwhile Veronica stands in a cage with people gawping at her. "Yes, pretty much," Veronica says. "Then T actually gets up and speaks about the performance, telling our story and then people feel bad that they were staring at me." T D adds, "Yes, it's a bit of a shock factor; people want to know who's playing bass and then I come out and say I deal with pornography addiction and it took me a long time to learn how to respect my wife in this cage. I think it's very entertaining and serves a good purpose for society."

T D explains where the idea come from. "I was writing everything down that I saw in dreams. I was dealing with pornography addiction from 10pm-4am as a Christian and married man. Then my wife caught me out on it. I would start to have these dreams, and God would pull me out of bed to write this down. Three and a half years of not sleeping every night. The dreams are a basis for the live show. God was calling us to do this. Veronica, Philip and I have sold everything we own and live in a trailer, trying to challenge people through the performance."

Obviously the Bentons are husband and wife; they explain how they met. Veronica says, "I actually met T D at church. He became a Christian in September 2000 and we met that October. We married three months later. It was very quick, everybody thought we were crazy, we are crazy but it's a crazy school so we are fine with that. We've been married eight, pushing nine years now. So that's our quick courtship!"

So, how did Phil get sucked into the vortex? "I was T D's drum tech," he responds, "in his first rock band since he got saved. That was about six years ago. He actually worked in a music store that my brother worked at, so I would come to hang out with my brother and met him then. Through that I became his drum tech and I started helping with the band. When churches would call him to do his testimony about the drug addiction we would do a little drum ditty beforehand and it kind of expanded into this."

That original band was called Uttermost, and played in an Incubus style. T D explains, "We did a lot of outreach in clubs and bars, and a lot of our local scene enjoyed our message back then and we were able to build lots of relationships with other Christian bands. During that band is when I started dealing with pornography, and you know, being a Christian, not many people talk about it. So I was caught in this hidden addiction as I was unable to tell my band mates, not wanting to lose my job. That's when I started having those dreams which Veronica finally caught me out on. It was a very tough time in our marriage; she could have divorced me a long time ago. But I was very thankful for Veronica because she was the kind of person who wouldn't let her partner fall and helped me through it. Because of my pornography, she fell into her own private addiction of bulimia." 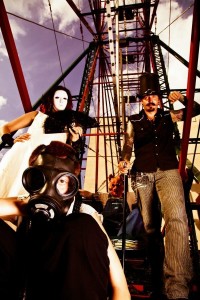 Veronica explains, "Essentially I thought it was my fault that I wasn't attractive, skinny, pretty enough for my husband. That went on for about a year and I tried to fix the problem which I thought was me. We wore a perfect mask at church; we'd show up and he would play drums and I would sing. Everyone would ask, 'How is everything going?' and we'd say, 'Oh great, we have been married seven months now.' Then back at home we were dealing with our own private hell. He didn't know that I knew or what I was going through. Finally one night I had enough and when he snuck back in bed at four in the morning I said, 'I know what you are doing.' I didn't know what else to say and we had to have some difficult conversations. But we were both wounded soldiers and we picked each other up; this has now become our mission. Everyone has a sideshow; whatever your addiction, it is about finding your drug of choice. Everyone can really relate to our story. We want nothing more but to share our story, not to point fingers, but to let people know that they are not alone and there is hope."

Part of T D's story is that he had already beaten drug addiction. "Yes," he explains, "I went through seven major lung operations. I started doing drugs when I was younger, played in non-Christian secular rock bands for six or seven years, leading this party lifestyle taking drugs to keep myself going. So it was seven lung surgeries before I found Christ. Finally the doctor said, 'You know what; I'm not going to give you anything else because you are going to kill yourself.' It was at that time of my life when I didn't know what else to do, I was very suicidal. I had already been in a mental institution, rehabs and help places and someone said, 'Have you tried Jesus?' I was very sceptical thinking you couldn't see Jesus or God. A few days later I decided to try it because I didn't know what else to do. It was at that moment God changed my life; I never expected him to. But I guess when you are at the bottom of the barrel the only way to reach is up. We just want other people to know that everyone is like this and they are not alone. It's just being honest enough to share your life. As Christians aren't we meant to share our mistakes and learn from each other? That's what we want to do; we want people to feel that we can all be one and change our lives. We are passionate about using music for our purpose and let God use our mistakes for other people."

Where did the name White Collar Sideshow come from? Philip explains, "A band called Embodiment. We like to call them the greatest band nobody's ever heard of. They are a little band from Dallas who had a lyric in one of their songs, 'White collar sideshow let the auction begin'. We always thought that would be a cool name. T initially wanted the project at first to be called Ex-Porno Junkie. We switched it over to White Collar Sideshow and the explanation you can give is that the pornography industry is in the white collar tax bracket, and the things people deal with such as drugs are all in that bracket and then filters down. It's not about how rich or poor you are, everyone has sin that they deal with. Life has sideshows, it's that simple!"

Ultimately it's about getting people to be honest about the things they are struggling with. It's about shining a light into the darkness of those areas. "We want to encourage honesty," shares Veronica, "integrity, passion and purpose - that's our road to true freedom. We want to encourage a revolution of your heart."

The band perform rock-theatre pieces and at the end, go into ministry. Says T, "Depending on where we are booked obviously time is limited, but our whole performance is based on that mission. It takes you through my mind as an addict, the insanity, and then I come out in the middle and say this is who I really am, I am wearing my heart on my sleeve and not pointing my finger at you; but this is who I am. Then we perform a song of hope, which is done with a horror movie actually, but it is chopping it up and turning it into a positive message. People who have recently died have returned to life; that's how we feel inside with these addictions but you can change! So many people from the audience identify with that and we get such a big response. It's not us, it's God."