Wild Harbors: The husband and wife alt-pop duo from Maryland 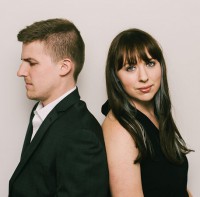 It takes a special kind of courage to launch yourself into full-time Christian music ministry without some big-time industry people offering support and finance. But Wild Harbors, a hugely impressive new alt-pop duo from Maryland, have done that. After releasing two EPs, one in June 2018 and one in January this year, not to mention a smattering of singles, Chris and Jenna Badeker will be releasing their debut full-length album in March. Brilliantly produced by Andrew Osenga (Laura Story, Caedmon's Call), 'Monument' takes in everything from radio-friendly pop to gutsy rock with a wily twist of Americana.

Chris Badeker met Jenna on his first day at McDaniel College in Westminster, Maryland. They started singing together long before they were a couple, playing '90s cover songs and leading worship at on-campus events. Following graduation, they began dating and eventually married, honing their penchant for songwriting along the way. When their performing began, Jenna admitted they had no clear idea of where their music making would lead. She said, "God kept opening doors for us. I don't know that we had any visions of being a band, but we just kept showing up and feeling called to write, and people kept inviting us to play."

When the couple were offered the chance to spend a month in Nashville recording with acclaimed artist and producer Andrew Osenga, the Badekers weighed their options prayerfully and accepted the opportunity. The experience ultimately helped galvanize their mission as a duo, and soon they were transitioning from full-time jobs to the full-time pursuit of music. It was a calling that felt divinely appointed, albeit a bit scary.

Said Jenna, "We've been established for quite a while in a different kind of life trajectory. It's honestly been terrifying to me, trying something new and stepping out into this. But we've been so moved by the people we've talked to throughout this process who have shared their own secret dreams and desires God called them to that they really enjoy." Added Chris, "Sometimes when it's hard, it's not wrong. It just means you need to move toward it and press into it more."

During the creative process for 'Monument', the couple began to peel back layers of unacknowledged anxiety. Songwriting became unintentional catharsis. "The songs brought out ideas I wasn't ready to admit yet - they illuminated fears I had and revealed decisions that needed to be made," Jenna reflected. "I didn't know if I was ready to have those conversations, but they came out in the music we were writing." Pivotal on the album is the title track. "'Monument' was the last song written for the album and it coincided with us making the leap to leave a decade of other careers behind and follow God's call to focus on music. We marvelled at how easy it is to forget the reasons why we do what we do when life gets hard, and we were reminded of how the Israelites built monuments to have a visual, physical reminder of what God had done for them. These reminders help us look back to what's true, as well as guide our path forward."

Another powerful track on the album is "House On Fire". Chris spoke about that song's theme. "Dealing with conflict can be extremely challenging. Often my response is to flee from conflict when, in fact, I should be running towards it. Moving forward towards the people we love can look scary at times, but it's our hope to do so in our marriage, friendships and life."

On the album, the brooding ballad "Alone Together" unpacks Jenna's worry about how a relationship could ultimately lead to isolation. "I was afraid of getting married and living a really lonely life inside that marriage," she shared. "I think we see that in a lot of relationships, especially in the social media age, where we have tons of interaction with people but there's no intimacy. Everyone's more connected than ever, but they're lonelier than ever because that connection comes through a computer screen."

One beautiful song which has already become a fixture of their live performances is the acoustic ballad "Abigail". Explained Chris, "When friends of ours gave birth prematurely to their twin daughters, they were informed by the doctor that one of the twins would likely not survive. The lyrics to the song are a retelling of the mother's prayers in that time and her prayers of gratitude now that her daughter has lived and grown."

Another song likely to grip even the most casual listener is "Ballad Of Wallace & Jessie". Said Chris, "There is a legend that tells of an orphan named Jessie who had a premonition of the Titanic's sinking, in which she saw Wallace Hartley leading the ship's band as passengers fled to lifeboats. The story says that she recounted this vision to an attendant at the orphanage before passing away later that night. The song reflects on the sacrifice the band made, using their musical talents to literally save lives at the expense of their own."

Said Jenna in closing, "We want listeners to be able to approach their own stories, their own decisions and the things before them with some hope and determination. In the process of making this record we have stepped out to do the thing that really makes us feel alive, and that's what we hope other people would be able to do as well. We all benefit so much from taking those risks in life."