Once a member of hitmakers Dru Hill, WOODY ROCK has overcome frustrating delays to get his debut gospel project into the CD racks. The R&B man spoke to Mike Rimmer. 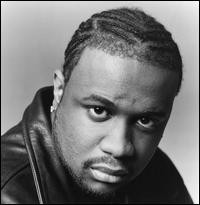 It was a year ago that I first met Woody Rock. Holed up in a hotel room he was waxing long and lyrical about his soon to be released 'Soul Music' solo project and the joy of the freedom to sing songs about his faith. The album was on release schedules in the summer of 2001 but finally made it into the shops in the spring of 2002. The delay was apparently because of legal arguments with Dru Hill's record label Def Jam.

Dru Hill provided Rock with a rollercoaster ride into the world of R&B success, hit singles and albums, huge fan response and worldwide recognition for their music. There are some who may be surprised to see Rock releasing a project that has a Gospel message. Normally what happens is that R&B singers, when they have passed their peak in the mainstream, succumb to the temptation of what is seen as an easy move to sustain a career in music by recording gospel. Woody Rock is not one of those artists. Here is a young man at the height of a mainstream career, returning to his roots, honouring the Christian heritage of his family and recording an R&B album with a strong message. Dru Hill fans will recognise the style and hopefully hear the message.

Saved at the age of three and raised listening to gospel music. Woody recalls, "My grandmother read the Bible to me very often and my mom and dad would always talk to me about the goodness of the Lord. So, based on those things, I just wanted to accept Christ as my Saviour. My grandma used to talk to me about Jesus all the time. She talked about him to me so much, he became like a superhero to me in my mind. People had Superman or Flash Gordon but I heard a lot about Jesus, so he was pretty much my superhero. As a matter of fact, I came dressed as Jesus for Halloween one time, with a piece of cane in my hand, which was supposed to be my staff. I was the Good Shepherd and had little toy sheep.. .that was my Halloween costume! I was like seven years old! As a kid I wanted to be saved and I feel that my knowledge of the Bible and my knowledge of the Lord really just kept me from making a lot of mistakes that I could have made."

Some critics will suggest that doing a gospel album is a huge mistake and that the message must surely alienate people. Woody responds honestly, "Man, I'm hoping not. That's why I tried to stay away from the kind of messages that said, 'If you do this, you're going to Hell! You're doin' wrong and you'd better do right,' and all that. I mean, all of that is very important too but I don't want to scare people. Not just yet anyway! Maybe on my third or fourth album, I'll start to sing songs like that but for right now, I just want to make music to tell people how good God is. Basically, to make people not be afraid and not make them scared to listen to it. I want to make music that makes people feel good and make them feel good about God."

When it comes to gospel songs he reflects, "I think it's just the words and the message that God is going to take care of you and God is going to bring you out of your situation, whatever that is. It just gives you hope. I know it gave me hope." Raised listening to gospel music, it's no surprise that he has chosen to record a new version of the Winans classic "The Question Is", this time drawing on classic gospel group Men Of Standard for vocal support. "Those guys can sing!" He laughs, "I was sitting up there taking singing lessons while they were up there singing! Those guys were great! I grew up in a house where I could always listen to gospel music. Listening to that song became one of my favourites. So when I decided to do this album I knew I wanted a song from the Winans. My first choice was "Trusting God" but Men Of Standard had already covered that. So I thought that since they already covered the song I wanted to sing I would get them to come help me sing this song for my album so that's how that came about."

'Soul Music' features a number of collaborations with other artists including his former band mates on "My Homey". He explains, "That song just came about as the fulfillment of a promise that we made to each other. That no matter which one of us was first to do a solo project, that we would do one song together as a group on everybody's solo project. "My Homey" is just a song that we decided to do together for my project. It's just a song singing about God being our friend. It has kind of a double meaning because when people listen to it, they're going to be thinking about us, Dru Hill, as friends too."

Woody also teamed up with hit duo Mary Mary but it wasn't because they'd had such a huge success with "Shackles". Explains Woody, "That was cool because at the time Mary Mary's record wasn't out. They were singing backgrounds and I remember on a couple of occasions all of us running to the TV together, to watch them singing in one of their performances! Now they're really, really successful and singing for the Lord. That makes me feel real good! It makes me feel that there's definitely an audience out there for my music because we sing similar types of music. It's similar with the beats and that. People can still dance and move to it and everything but we're singing about the Lord."

"I Won't Complain" is one of the key songs on the album. Woody explains, "It's a song that is a standard in churches. Pretty much every church I've been to sings this song. That was one of the favourite songs that my mother loved me to sing for her and when she passed away, I decided to put it on the album and dedicate it to her." Talking with Woody, it's clear that he feels his mother would have been proud of the album he has just recorded. He shares, "Even before it was my intention to do gospel, it was my mom's intention! She took me off to school, yanked me off to school while the cartoons were on because we were sitting there singing secular music and stuff like that. So, it was always something put into me by my mom. Now that she's no longer here, I feel like it's up to me to keep that going and carry that on. She really wasn't too big on the R&B thing. She kind of tolerated it, she was happy for me because I was happy but it was always a dream of hers for me to be singing gospel music." Sadly Woody's mother passed away before the album was completed.

Critics and fans may rave or be indifferent. They may be impressed by the music but hate the message. They may be touched by the message and want to know more. Words will be spoken, questions asked and column inches filled with speculation about the boy from one of the world's most successful R&B acts releasing a solo album with a Christian message. In the midst of all the debate, Woody only has one answer. He says, "I know that there's really only one person that I have to answer to and that's God. So whatever people think, that doesn't really matter to me anyway. As long as I've talked to the Lord and as long as he provides the way that I can eat. I don't have to be overly rich or anything, I'm not even in it for the money. So long as he provides the way that I can eat and can dress halfway decent, where there's no holes in the bottoms of my shoes or anything, then I'm just going to keep doin' it... regardless."