Write This Down: Hard rockers find inspiration in the parable of the Prodigal Son

Although they were formed in 2005, the hard rock band from Minneapolis, Minnesota, Write This Down have only in recent times got national attention. In 2010 Tooth & Nail Records released their eponymous national debut and now with Kingsway distributing their 'Lost Weekend' album, British fans too can catch up on this hardhitting aggregation. The band's Nate Rockwell (rhythm guitarist) admitted that there is a considerable improvement on 'Lost Weekend' from their 'Write This Down' debut. He told jesusfreakhideout, "We discovered after our debut album came out that we didn't like all of [the songs] live. So we made a conscious effort to write a record where we could play every song live with insane energy and in-your-face riffs. We wanted a much more cohesive effort with 'Lost Weekend', and I think it definitely leans towards the hard rock side of Write This Down."

Singer Johnny Collier added, "Musically, we realised that fans responded best to songs such as 'Renegade' and 'Alarm The Alarm' from our debut release. These songs are more anthemic sounding and so we sat down and decided we wanted to write 12 anthems. These of course are the most fun to play live anyway. Lyrically, we wanted to be as open and honest and talk about the things that most people are too are afraid of admitting. We wanted to put it all out there."

The band were formed in 2005 and consisted of Johnny Collier (vocals), Andy Kalyvas (bass), Chad Nicholls (drums), John Oberbeck (guitar) and Nate Rockwell (rhythm guitar). In 2007, Write This Down released two independent EPs, 'Alarm The Alarm' and 'Write This Down'. Confusingly, the band's song "Alarm The Alarm" did not appear on the EP of that title but on 'Write This Down'! In 2010 the group signed with Seattle's renowned Tooth & Nail Records. Oberbeck and Kalyvas left WTD prior to the band recording their first T&N album. Since then the group have added Nick Lombardo (bass) and Mike Kuwica (lead guitar) to the lineup.

About.com website asked Johnny Collier how the decision was made to use one-time Petra member Pete Stewart as the producer of 'Lost Weekend'. "Our manager and the label were the ones who pretty much decided on that, but when we listened to Grammatrain and saw who he has worked with in the past, we were beyond excited to jam with him. I really loved working with Pete. He really knows his rock 'n' roll. He gave us the creative space to show who we really are. In the past, we struggled to get that 'live' sound and with Pete, he really helped us capture that." 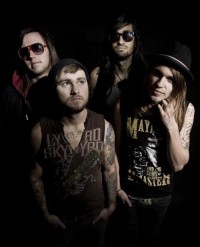 Rockwell was asked what was the story behind 'Lost Weekend''s title track. He replied, "Since day one of the release of our debut record, we struggled financially, we struggled spiritually, we struggled in ALL of our relationships, and we never seemed to regain any form of control. It was, essentially, a lost weekend that stretched over the course of two years. So we knew we had to write about it, because we knew there had to be other people out there struggling as we were and needed to know there's hope if you stay faithful. The title track is a small glimpse into the band's autobiography. It describes how stuck we felt and reminded us, in hopes of reminding others, that we don't have to be stuck forever."

Another powerful song on the album is "Cheap Affairs". Nate explained the origins of that song. "This is without a doubt our slowest, most relational-oriented track. The truth is that in today's society, we're surrounded by damaging influences. We have seen how damaging affairs can be on marriages, children, churches, friends and more. It's basically shining light on something society seems to be shrugging off as a non-issue. Hopefully opening people's eyes to the truth."

'Lost Weekend' features guest Matt MacDonald from The Classic Crime on the song "Touch And Go". Had they considered anyone else guesting on the project? Johnny replied, "We had ideas to have Sonny from P.O.D. rap a little on 'The Older I Get, The Better I Was'. We also lined up Josh from Emery, Christian from Blindside and Austin from I Am Empire; however, we recorded 'Lost Weekend' from Thanksgiving day to Christmas eve, and that is not the optimal time of year to get people on the same page. But the idea behind it was to have our friends that shared the road with us the past two years be a part of our new record. The bridge to 'Touch And Go' is 10 times better with Matt singing it. I mean, I could do it, and do it like a boss, but he killed it."

Collier was asked whether being known as a Christian band Write This Down felt pressured to be role models? "Absolutely. Every move you make is being watched and that pressure can really get to you. We haven't always been the best, but we are trying. We don't have it all figured out, we are struggling just like everyone else. I have a Bible app on my phone and it sends me an alert every day to do my devotions. Sometimes I don't do it, but most days I am faithful."

Nate had the final word about the band's thought provoking and challenging album. "The theme of 'Lost Weekend' encompasses the parable of the Prodigal Son found in Luke 15:11-32. It's our honest attempt to illustrate through music our experiences and regrets over the past two years, while understanding the hope and fulfilment of returning the Light. We want everyone to know that no matter how hard life gets, or how far you drift away, you can come back. 'Lost Weekend' will almost certainly raise questions about the meanings and messages to our songs, but please understand that was our intent. Our goal was to make people think about the decisions they are making in their lives in comparison to our stories. We can't emphasise enough the importance of being honest to yourself."