ZOEgirl: US girl trio talk about their connection with American youth.

ZOEGIRL are mentors and spiritual guides to tens of thousands of American girls. They spoke about their ministry and new album to Joe Montague. 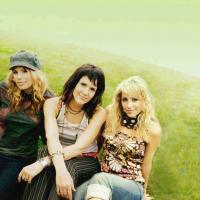 Nashville CCM stars ZOEgirl have seen plenty of changes since 1999 when artist manager Norman Miller surveyed the Christian music landscape and identified the need for a girl teen pop group. Miller approached Alisa Girard, daughter of the Jesus music legend Chuck Girard, and with her on board brought in Kristin Swinford and Chrissy Conway. The group's 'ZOEgirl' debut was released and with 350,000 sales it quickly became clear that Miller had indeed spotted a hole in the CCM market. But the threesome were much more than three wholesome Christian girls playing at pop stars for the safe Christian scene. They were full-on role models for a generation of American Christian girls struggling to make sense of this sex-obsessed, materialistic world of ours.

'Life' (2001) and 'A Different Kind Of Free' (2003) saw the group's sound mature. Now with a new album 'Room To Breathe' already being hailed in some quarters as the group's finest, it's clear that ZOEgirl are still developing. But can a funky urban tune like "Dead Serious" make make a difference with today's teens? Conway thinks so, "I really wish there were songs like this when I was younger. Not only do I believe in it but we see it with our own eyes with the letters and kids coming up to us after concerts." She says young women have shared with them about how they have gone as far as breaking off relationships that were abusive or relationships in which they were being pressured sexually by their boyfriends. She said the girls often allude to the music as being an inspiration to break free from these abusive situations.

Like the previous albums, 'Room To Breathe' contains lyrics of particular spiritual significance. Says Conway, "I really feel like 'Room To Breathe' is giving these girls a voice. Ultimately everyone is trying to be heard." All three members of ZOEgirl have been approached by girls after their concerts confiding in them about issues such as eating disorders, low self esteem and "cutting". During the concert Girard explained to the audience the history behind the song "Scream", featured on the new CD. The lyrics are drawn from Girard's own previous history of battling depression. She said that at one point a few years ago, "I didn't want to leave my room or even get out of bed." A little more than one year ago she was going through a bit of a struggle and the lyrics to "Scream" began to take form. "Does anybody know how I feel?/Sometimes I'm numb/Sometimes I'm overcome/Does anybody care what's going on?/Do I have to wear my scars like a badge on my arm for you to see me?"

The message however that ZOEgirl want young women to hear is one of hope, a hope that only God can give. "I don't have to scream for him to hear me/Don't have to bleed for him to see me/'Cause I'm clean, he is listening to me/I don't have to scream." Girard says, "I have always just written from my heart and my own experiences." She believes it is this kind of honesty that teenage girls are looking for and are attracted to. "I think the issue of wanting to be accepted is a huge one. I would be willing to bet that most people do face that at some point in their lives," says Conway, and continues, "Self-esteem is the root of why we do a lot of things. Why we get into drugs, why we get into parties, why we get into drinking, cutting and abuse. It all stems from the fact that we don't really understand who we are in Christ. It was a huge issue for me in high school. I didn't even know a Christian during my teenage years. I didn't become a Christian until I was 18 and so I didn't really have any perspective of who I was." She says she was just trying to find a place to fit in.

Although ZOEgirl has a special passion for teenage girls they want it to be clearly understood that their message is intended for all teenagers no matter what the gender. In fact during their concert they challenged the audience with, "Are there any guys here who would be man enough to say they are ZOEboys?"

Whereas fans in recent years have come to focus on some tremendous guitar grooves from Swinford and Girard, "Scream" highlights Conway on the keyboards. You also come to appreciate once again the tremendous harmonies of all three ladies. One outstanding song on their new album is "Not The One", which provides a voice for those seeking to break out of abusive relationships. "You can try to break me, try to hurt me/Till the walls fall around me/But you can never make me feel unloved." When asked if there is a risk associated with writing cutting edge lyrics, especially when so many in the Church do not want to admit that the same issues exist in their own congregations, Conway replied, "It may not be a popular thing or what anybody wants to talk about but I'm really sure that's why [God] has called us together as a group."

One of the ministries that have become very important to ZOEgirl is the trio's partnering with Big World Ventures for missions trips each year. Last year they took approximately 60 teenage girls and guys to Ecuador. While the group and the teens participate in everything from construction, hauling gravel and cleaning, the music of ZOEgirl also plays an important role. Last year they played an open air concert in a large park during the time of day that people were on their way to work. The teenagers participated in a choir on stage with the band. A highlight for Conway was watching people who were walking to work just like any other day stop, listen to their message and commit their lives to Christ.

ZOEgirl is actively involved with Compassion International which helps meet health care, nutritional, educational and spiritual needs for more than 600,000 children living in poverty in 23 countries world wide. A hush fell over the audience and there were probably more than a few people with lumps in their throats as Conway shared from her own personal experience. Conway and husband James made a trip to Nicaragua in 2004. Before the trip she was absolutely insistent that she get her nails done. While on the trip she encountered a little girl who started playing with her hands and looking at her freshly manicured nails. As she did so Conway noticed the little girl's own hands were rather dirty because there wasn't even running water in the village where she lived, so she could wash her hands. When Conway returned home she took off her nails and committed the money to supporting a child through Compassion International. It wasn't so much giving up her nails that was important to Conway, it was helping to give someone else the basic essentials of life that we take for granted. Swinford shared how she sponsors a little girl named Priscilla and how ZOEgirl as a group sponsors a little girl in Ecuador. ZOEgirl wants you to know they are not just another pop/rock group playing good music. They want you to know they take their ministry seriously and know they have a responsibility to be role models for their teenage fans.

The music and ministry of ZOEgirl has taken on a fresh meaning for Girard, Conway and Swinford as all three married in the past two years. Two of them, Girard and Conway, have step-children. Conway is step-mom to James Katina's sons, Jackson and Dylan, while Girard has a step-daughter Mychael who is 11 years old and a step-son Wyatt who is seven. I asked both ladies if having families has altered their approach to music. Girard says she now feels more settled as a person and "I think it enabled me even more to focus on my ministry and what I can actually give to other people." Conway says now they see themselves almost in a mother role to the teenage girls they sing to. "Almost like we want to protect them and guide them, more in a motherly sense than like a peer."

I love the song "Scream." lately, i've been battling the temptation to hurt myself again after so long managing not to. i had never heard of ur band till i was listening to Cross rhythms the other night and i heard the song "scream." the lyrics spoke of someone needing others to realise just how much the emotional pain in her life was destroying her on the inside. i had been angry with God for the last 2 months becos i was still in torment, even after forgiving someone in my early life who had hurt me badly. i felt like my forgiveness towards this person must be fake, because i was still feeling so angry about what they'd done. A couple of weeks ago, a well-meaning church elder questioned that i really wanted to get well, which broke my heart all over again. i felt like i was bleeding inside already, and thought, "i don't want to go back to my razor blades again, but if i don't then i'll do something much worse, maybe even fatal." i wanted to live, but my feelings of anger and hate towards my abuser, and those who turned me away when i felt so desparate were so strong, that i was scared of myself. when i heard your song on the radio, i realised that God knew what was happening inside my head, even if others were freaked-out by it, and i didn't need to express my feelings to Him by damaging the body he has given me. Am still working through my issues, but i am glad that you wrote a song like "Scream" for girls like me. i pray for your band's ministry- if any person is struggling like this then i hope that hearing your song will help them realise that God knows what they're going through, and its acceptable to feel depressed, cos he's big enough to understand. Thanks, girls, God bless you all. C

For more on ZOEgirl visit the ZOEgirl artist profile