In a new occasional series Tony Cummings will be looking at classic songs of Christian music old and new. Here he reports on DC TALK's 1995 milestone "Jesus Freak". 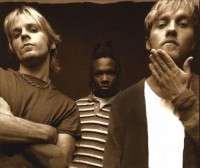 [pre-verse]
Separated, I cut myself clean
from a past that comes back in my darkest of dreams
Been apprehended by a spiritual force
and a grace that replaced all the me I divorced

[post-chorus]
There ain't no disguising the truth
No I ain't into hiding, the Truth

[pre-verse]
Kamikaze, my death is gain
I've been marked by my Maker, a peculiar display
The high and lofty, they see me as weak
but I won't live and die for the power they seek

[post-chorus]
No I ain't into hiding, the Truth 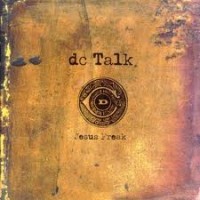 [bridge]
People say I'm strange
does it make me a stranger
my best friend was born in a manger?

Mark Allan Powell wrote in the Encyclopedia Of Contemporary Christian Music, "The world of contemporary Christian music was completely blown apart at the seams with [dc Talk's] release of a single song, 'Jesus Freak'. . . Few were ready for 'Jesus Freak' with its manic, searing guitars, speed rapped verses, confrontational lyrics and some of the best riffs since Clapton played 'Sunshine Of Your Love;."

As bitingly memorable as the guitar riffs and as infectiously catchy as the vocal hooks were, it was the lyrics which seemed to sum up a latent passion existing in a generation of young Christians who for decades had been ridiculed by their peers for their belief in Christ. The song's co-composer, rapper and (by the time "Jesus Freak" was being recorded) singer Toby McKeehan spoke about the theme of the song. He told journalist Richard E Warden, "'Jesus Freak' is obviously a throw back phrase. It was a negative phrase back in the late '60s and early '70s. If you were a 'Jesus Freak', that was people talking down to you. We've chosen to take the opposite approach and say that, that's something to be happy about. The word freak, I actually looked it up in the dictionary as I was writing the song. The third definition in the copy of Webster's I have says the word freak is a noun, an ardent enthusiast. It simply says you're a sports freak, it just means you love sports, you're an ardent enthusiast. You can label us Jesus freaks."

The strident militancy of "Jesus Freak" was in stark contrast to the depressing pabulum that had clogged so much American Christian radio as more and more artists striving for the "crossover" hit played down the biblical content. Said Toby shortly after "Jesus Freak"'s release, "The problem with a lot of religious and Christian music is that it tends to be watered down. Some artists tend to back away from what they really want to say. People respect you more for taking a stance and sticking with it. Our goal has always been to be out there on a mainstream level, but we won't compromise our message to achieve that."

The track's producer Mark Heimermann believes that the song's unflinching declaration of unashamed Christian witness was in part possible because of dc Talk's sudden and unexpected move from the pop rap of their first three albums to the grunge-influenced rock of "Jesus Freak". Said Heimermann, "I have to give Toby credit for bringing a bold message. The musical style that we did on that record made it possible to bring a lyric that was bold and in-your-face. You couldn't put those lyrics over a different kind of music, but you could get away with it if you were rapping. You could get away with it if you were yelling over rock guitars. That's what cut through to people's hearts. It slapped you in the face, but it slapped you in the face with the truth. Whenever that happens, it usually feels good on the other side."

When "Jesus Freak" was released and began to receive Christian radio play in the US the song struck a resounding chord with hundreds of thousands of young Christians. But as Mark Allan Powell wrote, response by the non-Christian media was negative. "[Christian programmers] held in their trembling little hands what was unquestionably the best rock song of 1995, Christian or otherwise. And what about the poor DJ at the average (non-Christian) college radio station? The reaction across the nation was a bit like that of Archie Bunker (TV racist) when he got to meet his favourite singer - Sammy Davis Jr. Most college radio DJs and programmers hate Christian music, but what could they do when a very Christian song by a very Christian group turned out to be unquestionably the best rock song of the year? Some played it, fuelled by requests from students who were less fixated on ideology and just wanted to rock; many, steeped in denial, just couldn't bring themselves to do so. Rolling Stone dismissed the song as 'a knock-off of Nirvana's "Smells Like Teen Spirit".' Come again? Parts of it might sound a little bit like Living Colour covering that song, with Arrested Development on guest vocals. . . but to say that is to wander a ways from 'knock off,' isn't it?"

In Britain non-Christian media response was just as negative as Rolling Stone's. The best selling Q magazine patronisingly observed that dc Talk's "songs might be some advance on 'Jesus Wants Me For A Sunbeam". . ." before rewarding the album a paltry two stars. But if non-Christian rock critics and radio programmers allowed their spiritual prejudice to ignore "Jesus Freak"'s brilliance, believers embraced the song as their anthem. The single and the subsequent 'Jesus Freak' album achieved huge sales, unprecedented for a CCM act, the album reaching 16 on the Billboard 200 mainstream album chart and selling well over two million copies. In 1997 the album won the Grammy for Best Rock Gospel Album.

Producer Heimermann said he and the band had no idea at the time they were recording how important the record would become. "We just hoped that we could do a record that 10 years from then we could put it in the CD player and still like it."
As it turned out, he and the band have gotten their wish in over two million homes.

What are you coming out with next? It's been a while.... I want something new and have loved your music since I first heard you in the early 1990's! God still uses you to bless me now, a mother and wife.... U give me hope and I keep rocking in God thanks to you! If you're getting tired, remember we love u and if u need some help let me know, I love worshiping n praising God...... God is great n worthy to be praised.......blessing to u all!