Stripped down versions of songs released by Decyfer Down 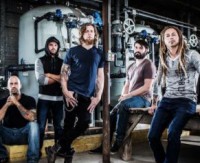 A FIVE-song 'Acoustic EP' has been released by North Carolina-based rock band Decyfer Down. Read a Jesus Freak Hideout review, "This acoustic project was originally a perk on the IndieGoGo campaign of their latest album 'The Other Side Of Darkness' but now, roughly one year later, they are releasing it to the rest of the world. . . There is enough variation from the originals to make this worthy of many spins. It will probably be most appreciated by long-time and current fans."