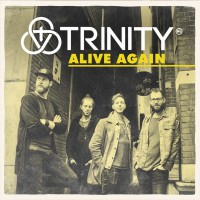 A GROUP from the Netherlands, Trinity, release their first new music since their 2016 album 'Desert Rain'. The track "Alive Again" was produced by Grammy-nominated Ian Eskelin and Barry Weeks and is the first single from the band's album 'The In Between', to be released in the autumn. "Alive Again" is the band's first single released in the USA. Trinity are described as "a worldbeat band that fuses South American and Irish folk with African beats and pop grooves to create a unique, acoustic worship music experience."