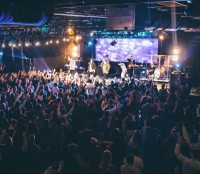 A 17-SONG worship album 'All Tthe Earth' by The Belonging Co has been released independently. The project emanates from The Belonging Church described as "Nashville's fast-growing church for creatives and everyone else." The church is led by husband and wife Henry and Alex Seeley who served many years on the pastoral team at Planetshakers church in Melbourne, Australia. 'All The Earth' features Henry Seeley, Meredith Andrews, Lauren Daigle, Sarah Reeves, Cody Carnes, Kari Jobe, Mia Fieldes and others.