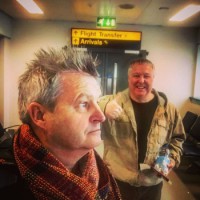 A SHORT film by Lancashire-based musician and activist Breakspear, now available on YouTube, endeavours to answer the question, what is a refugee? Wrote Nick Breakspear, "So many times we pass harsh comments on people and situations without having any real first-hand knowledge - often choosing to take the spin of tabloid style news reports rather than investigate the truth for ourselves. To my shame, this is where I was at five years ago, when this searching question landed at my door. What is a refugee? Since then I've received several invitations to go and see for myself what the story is like on the ground - condensing it into this short film Moria, shooting most of it myself with extra footage supplied by Ghafoor Hussain. He is a true humanitarian hero who literally puts his money where his mouth is, feeding thousands of desperate human beings daily for FREE! On my eye opening journey to find out what a refugee really is, I've met a small army of modern day good Samaritans who thankfully have been willing to cross political and cultural divides to offer food and shelter to our fellow humans - it's only when our hands are empty we look for such people to fill them."