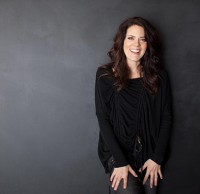 A COLLECTION of 15 songs that began as lullabies sung over her children has been released by singer, songwriter and worship leader Christy Nockels. The album 'Be Held: Lullabies For The Beloved' is produced by Christy's husband Nathan Nockels. Said the singer, "I'm so overjoyed to be able to present 'Be Held: Lullabies For The Beloved'. This album comes from a deep desire to impart and share what God breathed into me so many years ago, instilling in me an awareness of my belovedness that I have never forgotten." The project is released on 29th September.