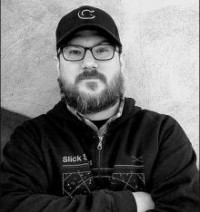 SOUTHERN Indiana's Ben Knight has issued the 'Myld Stallyn' EP. He said, "After years of touring in pop, punk and rock bands I wanted to try something different. I discovered MC Lars several years ago and fell in love with his version of hip-hop. Soon after I discovered other nerdcore artists such as Megaran, MC Frontalot, Optimus Rhyme, Sammus and others. You could create hip-hop music and have fun with it. Sing/rap about comic books, video games, science fiction, movies. There are already so many hip-hop/rap artists out there and I wanted to stand out. My thought was to take the production and music seriously but make all of the lyrical content satirical. When I'm behind the mic, I want to entertain and give people a good show. That being said, when I have a mic in my hand, I also need to share the love of Christ and how he's changed my life."