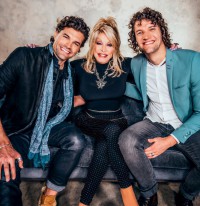 For King & Country and Dolly Parton

SINCE the recording of the hit song "God Only Knows" by Dolly Parton with CCM hitmakers For King & Country, Nashville's country music community have embraced the band. The Country Music Association organised CMA Country Christmas stage show, televised by ABC Television in the US on 3rd December, featured For King & Country performing their hit rendition of "Little Drummer Boy". Said the duo's Joel Smallbone, "Growing up in Nashville and loving the songs that are born here, country music specifically has always been welcoming and familiar to us. So, to be invited to perform 'Little Drummer Boy' as part of the CMA Country Christmas felt like a lovely bear (or Santa Claus) hug, celebrating one of the great and most unifying holidays of the year."