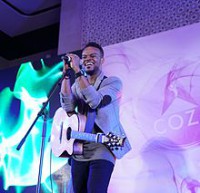 PROVIDENT RECORDS have released the project 'Crossover: Live From Music City' by Atlanta-based singer Travis Greene. The album features guests such as Atlanta-based Geoffrey Golden and Dante Bowe who has toured Europe with Eddie James. Other guests include Isaiah Templeton, Chandler Moore and Hailey Kiteley.