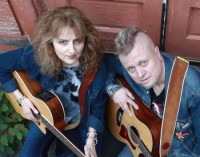 IOWA-based independent label Raven Faith Records have signed husband and wife duo Terry & Diane McCabe. Read a press release, "Terry & Diane McCabe have been living their dream, being involved in the music scene for many years playing acoustic, bluesy, folk rock with a smidgen of country that is saturated in Americana. They are not ashamed of living out their faith and it is woven through their music, which they have shared throughout the United States and 13 different countries. Terry and Diane have been taking the stage at venues such as coffeehouses, wineries, taverns, festivals, and clubs." This month, Raven Faith will be releasing the couple's album 'Dance The Dream', with another album of new music to be issued in early 2020.