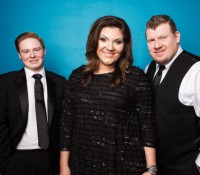 THE SOUTHERN gospel group from Nashville, Tennessee, The Griffith Family, who have released such albums as 2015's 'The Griffith Family' and 2016's 'Give His Love Away' and have been called by Singing News "one of the fastest rising artists in the gospel music community," have signed to New Day Records, a division of Daywind Music Group. An album will be released in early 2018 and a single "That's Who He Is" is now circulating US radio.

I am interested in purchasing an accompianant soundtrack of "That's Who He Is" by the Griffiths. Can you please tell me where to find it.. thank you!