Nashville's Life Of Carter weighing in with debut EP 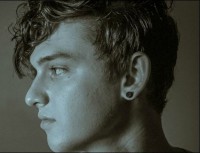 A NASHVILLE-based band Life Of Carter, fronted by Carter Frodge and "formed around the vision of reaching the millennial generation through an electro pop vibe and lyrics that address the life of a young Christian adult," have released their debut, self-titled EP. Frodge is a former member of CCM hitmakers Everyday Sunday and the EP include songs written produced by Dove Award winner Chuck Butler (Brandon Heath, Royal Taylor) and EDM man David Thulin (Becka Shae, Press Play).