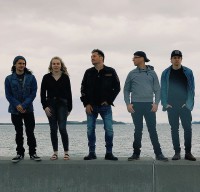 NEW ENGLAND-based pop-rock band Right Hand Shade has released their self-titled debut album. It was recorded at Halo Studio and was produced by Darren Elder and Kevin Billingslea. Lead vocalist Matt Jones says, "We're not pretending to have it all figured out. We're just being faithful to the ministry that God has given us, and sharing our message wherever we can. I think people tend to relate to someone who has been broken, who has walked through pain and has asked God, 'Why am I facing this thing?', but who has also been redeemed and has found the hope and freedom in knowing that our God will never leave or forsake us. He alone will give us the strength to overcome. Our songs are written from the roots of those experiences."