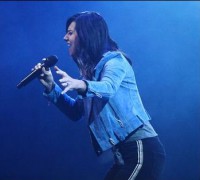 THE FIRST live worship EP 'Faith And Wonder: Live' by Dove Award-winning CCM singer Meredith Andrews will be released on 8th March 2019. Andrews will be releasing three singles digitally leading up to the six-song EP release. On 7th December, the first song, "A Million Saints" - co-written with Phil Wickham - will be available. Next year, "Faith And Wonder (ftg Cody Ray Lee & Abbie Simmons)" will be issued on 4th January and "Open Over Us" on 8th February. 'Faith And Wonder: Live' was produced by her husband, Jacob Sooter, who also co-wrote five songs on the EP. She also enlisted the help of her church family from the crew and production team as well as a large portion of the audience for the live recording. Said Andrews, "More than anything, I wanted this project to honour Jesus. It was an opportunity to get in a room full of people, sing these songs over and with them and encounter the presence of God together."