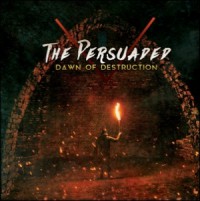 AMERICA'S RockFest Records are releasing the full-length debut album from Nashville-based metalcore band The Persuaded. Produced by Dathon Conner (Spoken, Icon For Hire), 'Dawn Of Destruction' features "10 tracks showcasing both clean and screamed vocals atop fiercely driving guitars." The Persuaded have released two independent EPs since their formation in 2012 and have opened for such artists as Disciple and Decyfer Down.