From a basement studio in Bath, JONNY BAKER and his associate Jon Birch have turned out some of the most radical albums in the whole field of worship. Mike Rimmer reports. 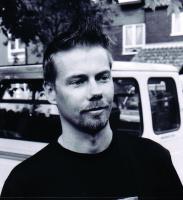 Jonny Baker is one of the unsung heroes of the British worship scene, creating imaginative underground alternative worship, with his musical partner Jon Birch, usually released on their own Proost record label. Operating from a recording studio built in the basement of a house in Bath, Baker is also the National Youth co-ordinator in the UK for the Church Mission society. He is a member of Grace, an alternative worship community in West London, co-ordinates the worship at Greenbelt and has recently co-authored the book Alternative Worship with the Late Late Service's Doug Gay. I began by asking this talented record producer, songwriter, author and seminar speaker to tell me a bit about his work with composer/ singer/producer/ engineer/programmer Jon Birch.

Baker comments on his relationship with Birch, "We're partners in crime I guess! We've been best friends for years and Jon I think is one of these creative geniuses, I mean you used the term 'unsung hero' and he's definitely one of those. We've written songs together and we first set up the record label Proost out of a conversation we'd had in the pub just thinking about making music and recording songs. We were finding what was released by Christian record labels quite frustrating in terms of style. Rather than having to go through the process of negotiating with them all the time, it just seemed better to set up an independent label and we'd be in control of it. We'd be small but our artistic freedom was exciting and important to us. Ever since then Jon and I have collaborated on musical projects. He's lives in Bath and I'm in London but it's an exciting and energising relationship, both in terms of friendship and music."

Thinking about the British worship scene, Baker comments, "I don't want to be too critical of the Christian record labels. I just think there's a danger with Christian labels because it's quite a small market in this country and you know that certain things sell like Matt Redman. He's a good songwriter and he's been very successful but I think the temptation on the part of the Christian record labels is to think, 'This is what sells, so this is what we need to reproduce.' I think that's sometimes the challenge with small markets. Where are the risk takers? I don't know why but it sometimes feels like the imagination or the will to take risks isn't necessarily there, which is why I think we need independent labels that can do their own thing and live or die by them!"

And that's exactly what Baker and Birch have done. They have created albums that take risks and make an impact. 'Grace' was the first release on their own imprint and Baker recalls, "We pressed 1,000 copies and I think we then re-pressed 500 and as far as we were concerned, that was HUGE and very successful! With the advent of the internet, I think it becomes possible to do your own things and give people access to it in a simple way. We don't really have any distribution in place other than where we go and play live we sell things. But we now have a small catalogue and most of our orders come through the internet."

Their 'Eucharist' album was originally created for Greenbelt's Sunday Morning Service in 1999. He explains, "The idea with that was simply to take the components of a traditional liturgy. One of the things that excites me about it is you think about some of the hymns and the traditional liturgy like the Sanctus 'Holy, Holy, Holy Lord!' or 'Christ has died, Christ has risen, Christ will come again!' These are probably some of the oldest hymns in the Church, they've been sung for centuries. What we wanted to do was to take that ancient, historical flavour of worship and to give it a contemporary feel or vibe. So we've re-written the liturgy, both the words and song, but tried to keep that feel. So for example 'The Gloria' that we've done is again an ancient hymn of the Church but we've got a sample that you hear on the track, of this Anglo-Chilean saying 'Glory to God!' in Spanish and then a call and response thing with a contemporary feel and I think it's really strong. The liturgy has a lot of weight and depth to it but with the music, it just lifts it and makes it live."

This return to older more traditional forms of worship could be seen as a reaction to charismatic contemporary worship. Baker explains, "I've definitely found inspiration and a home and friends in the movement that's become known as 'alternative worship' within the UK, pioneered by the likes of The Late Late Service and The Nine O'clock Service. I think there are significant differences between 'alternative worship' and 'charismatic worship'. One of them would be what you've identified, that 'charismatic worship' tended to turn away from tradition and ritual saying, 'That's what we want to get away from.' It got away from church buildings and sat in school halls and sang choruses. The theological claim was that it was returning to New Testament Christianity, whereas 'alternative worship' very much wants to play with the tradition and see itself as strongly in the tradition. I think in the cultural context we're in now, tradition has a real weight and a depth to it that really resonates for people. People want sacred space and so on. So I think that's definitely one difference."

One of the important things about alternative worship is that it is finding new ways of dealing with some of the cultural baggage which is attached to certain symbols and language that the Church uses in worship. "It's very much about new forms of worship and it's trying to help people encounter Christ within the context of their culture. I've been in youth ministry for years and one of the problems of relating to kids outside the Church is that when they're interested and they become Christians you invite them into church and it feels like an alien world. That's equally true for your Sunday morning common prayer service as it is for a charismatic singing in ministry time, they're both very alien worlds. So I think what alternative worship is trying to do is to construct worship out of the culture and the every day world that people are engaged with. It helps people encounter God in a way that resonates with them in worship but equally it helps them relocate God back in their every day world."

He continues, "I think the Church has had an interesting relationship with culture. At times we've been almost anti-culture.you know cinema and music are of the Devil and this whole debate that's gone on. It's not quite like that now but still, we still use the language of describing certain things as 'worldly' and expect that young people who become Christians will want to avoid certain things and so on. Whereas I think I'd want to say that the whisper of the Spirit is strongly present in popular culture, not just in nature or other kinds of places where historically people have located God's presence."

Jonny is clearly a thinking Christian and a man who chooses to follow his convictions. This was particularly evident on the 'Backbone' album under the group name Jonnys In The Basement. A lot of the Western Church is very pro-Israel. People are always encouraged to pray for the Jews and Birch and Baker released an album that highlights the plight of the Palestinians. Isn't he just deliberately being awkward? "No. To be honest," he responds, "this is one of my favourite albums on our label. I think it's really strong. It's very, very different. It's dark, moody, sad! But it came out of a visit I made to Israel and Palestine in February 1998. At the time, I knew very little about the situation and I went with Garth Hewitt. He took me out there to meet people with the Amos Trust and it was a profound, transforming experience for me."

He continues, "We met people involved in the peace process over there, both Jews and Palestinians but we clearly got more of the Palestinian side of the story. I encountered lots of situations and when I came back I was very angry and very sad. One Palestinian guy, Ebraheem, spent five years saving pennies and building this house and he was a peasant, no harm to anybody in the middle of nowhere. The day he finished the house, the Israeli bulldozers arrived and razed his home to the ground because Palestinians can't get permits to build anywhere. There's tragic story after tragic story like that there."

The genesis of the album began on that trip as Jonny borrowed Hewitt's guitar and began writing songs whilst he was there. He remembers, "When I came back, I met up with Jon Birch and we talked about the idea of maybe doing a single or something because I felt like I was pregnant with these songs. I just HAD to tell this story. We talked about it and I shared with him some of the experiences and he then wrote some of the songs and I wrote some more songs. We had an album's worth of material and I think we thought nobody would buy it because so many people read the Scriptures that seem to imply that the Jews going back to Israel is the fulfilment of the Biblical prophecy. I don't particularly want to get into that in this interview but there are plenty of other ways of reading it."

Jonny believes the 'Backbone' album is one of their strongest but also realises that it is unusual. "It's SO politicised and it's full of heartbreaking stories it's just so unlike Christian music. It was removed from a Wesley Owen bookshop in Bristol because someone complained about it because of the kind of politics I suppose so it's kind of a curious project!" 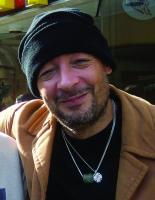 What a lot of people in the West don't realise is that there's a significant part of the Palestinian population who are Christians. Jonny remembers, "We met with the Palestinian Christians over there who are peace-loving people, they've lived on the land for years and years and they have the memory and history of living peacefully with Jewish neighbours. They long to do that again but things have just conspired one way and another against that." There is the image in the West that equates Palestinian with bombers and terrorists and that thought inspired Jonny to write the song "Terrorist". He explains, "We definitely have the stereotype of Palestinian equals terrorist and the song raises a lot of questions about that. But that wasn't the impression we got from the Palestinians that we met, they were peaceloving people. I think the whole suicide bombing thing is tragic, there are no winners in that at all. It's people taking desperate measures who feel very desperate but that's certainly not the position that everyone's in over there."

One of Baker's most successful projects is 'Labyrinth' which was born out of a project in St Paul's Cathedral as an outreach event in the year 2000. It was originally a millennium project. Baker recalls, "We were with a group of about three other alternative worship groups around London, dreaming up ideas to do something bigger for the millennium and the Labyrinth was one idea. To our amazement, we persuaded St Paul's Cathedral to let us hooligans in to do something! So we invented the Labyrinth."