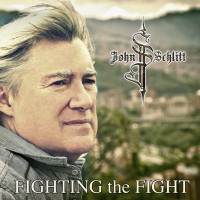 THE FORMER lead singer of rock icons Petra, John Schlitt, has released his first new music in six years. The single "Fighting The Fight" was co-written by Schlitt and Ryan Horn. The track was produced by another former Petra member, John Lawry, for 4K Records. Schlitt tours as a solo artist and as a member of The Union of Sinners and Saints.