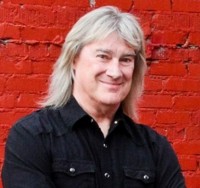 RENOWNED rock artist John Schlitt, who was once the frontman of best-sellers Petra and has subsequently gone on to have 11 Cross Rhythms playlist hits, has released the single "Feel It". The song was written by Schlitt, Scott Bernard and Dan Needham, who also produced the single, and is from Schlitt's new album, 'Go'. Schlitt also brings his lead vocalist talent to The Jay Sekulow Band, a seven-piece ensemble featuring Jay Sekulow, chief counsel for the American Center for Law & Justice and host of his own radio and talk shows. Other band members include Schlitt, John Elefante, Scott Kirkman, Marco Pangallo, Chris Cooke, and Mark Lee Townsend.