Wyoming's Righteous Vendetta update their 'The Fire Inside' album 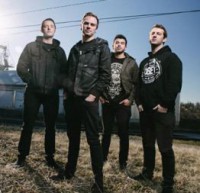 THE WYOMING-based metal band Righteous Vendetta have re-released their independently recorded album 'The Fire Inside'. Originally released in 2014, the new deluxe edition, now titled 'Reignite: The Fire Inside', features four previously unreleased tracks. The band are about to join Seventh Day Slumber on a tour of the US.