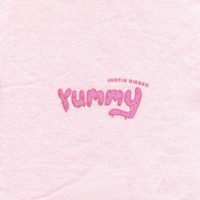 THE 25-YEAR-OLD superstar Justin Bieber debuted his first single in five years, the R&B-inspired "Yummy", when he teased the song to his 123 million Instagram followers on Christmas Eve, revealing in a short film it would be the lead single for a new album in 2020. The Independent newspaper described the track as featuring "low-key synth, bass and mostly restrained vocals from the Canadian, with frequent collaborator Jason 'Poo Bear' Boyd listed as a co-writer and producer."