Unreleased songs get an airing on Dissident Prophet EP 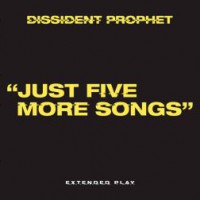 BRITAIN'S highly regarded rock team Dissident Prophet have released an EP. Describing 'Just Five More Songs' Dissident Prophet's frontman Andy Jennings said, "This is an EP of five songs not released on albums. However our new album of songs is on it's way, and we'll release them one at a time."