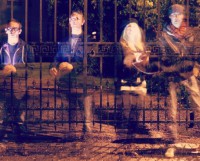 THE VETERAN apocalyptic rock band from Birmingham, Dissident Prophet have released a new album. 'Strange Days' features such songs as "Shadowlands", "Wait For The City" and "Good Men Gone". The album follows on from 2015's 'Red Moon Rising' which produced the Cross Rhythms radio hit "Comfortable In Babylon".