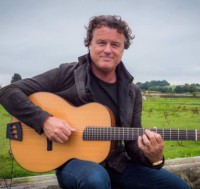 THE ALBUM 'Franklin54' by John Stamp, which includes Stamp's recently released single "Blowing Me Kisses (ftg Leigh Nash)", has been released. Read a press release, "'Franklin 54'was written in England and recorded in Nashville during the spring of 2017. John Stamp, after 20 years of hibernation, decided to put an album out. It's rooted in English romantic notions and twangs like Tennessee."