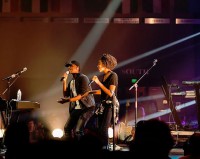 BROTHER AND sister hip-hop duo Evan & Eris, from Colorado, have released a Christmas single, "Friends & Family". It follows on from the singles "Be Alright (ftg Steven Malcolm)" (released in February) and "You Know" (released in July). Evan and Eris Ford have produced/performed on songs for artists such as Andy Mineo, Derek Minor and Canton Jones.