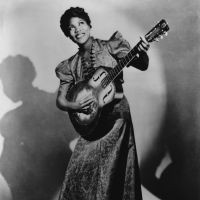 TODAY the late gospel singer and guitarist Sister Rosetta Tharpe is to be inducted into The Rock And Roll Hall Of Fame. Wrote Mojo magazine, "Tharpe's contribution to the story of rock 'n' roll would continue to be undervalued outside the community of British R&B fans - despite her influence on Johnny Cash, Little Richard and her trailblazing status as a transatlantic icon of the electric guitar. Tharpe's induction on 14th April into the Rock And Roll Hall Of Fame (with an "Award for Early Influence") 45 years since her death in 1973, is overdue recognition for the unforgettable sound and sight of this remarkable woman. As Johnny Cash put it on his own production in 1992, "I can still see Sister Rosetta playing that Stella guitar."