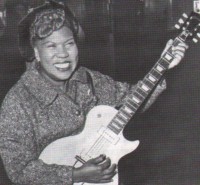 SINGER, guitarist and gospel legend Sister Rosetta Tharpe is featured on a new vinyl release by Org Music, 'Live In 1960'. Originally recorded in Paris in 1960 it wasn't until 1991 that the recording had a CD release through Southland Records. The Org Music re-release is its first on vinyl.