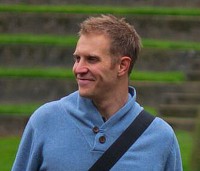 PORTLAND-based worship leader Eric Kneifel will be releasing a single "My Only Aim", based on Acts 20:24, on 30th November. Guesting on the song is Lindsey Linn, a singer at Countryside Community Church where Kneifel is the Director of Worship & Arts. In 2016, Eric released the 'No Shadows' album.