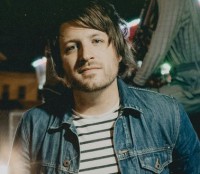 RHODE ISLAND-based indie rock band Collington have released the EP 'In Between'. The group's frontman James Collington spoke to New Noise website about his favourite song, "War", on the project, "It's a melting pot of ideas and emotions. When I was writing the song I felt like I was 'In Between' (see what I did there?). The heartbeat of the song is to faithfully put one foot in front of the other and fight against any barrier that would keep you from heading in the right direction."