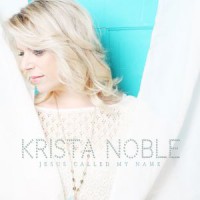 CANADA-based Christian music singer Krista Noble has collaborated with friend and author Carol Anstey. Krista's 'Jesus Called My Name' album features the hit single "Is It All Worth It" which was written by Noble and Anstey, and was produced by award-winning Jonathan Goodwin. Carol Anstey has published her new book Called To His Purpose. Guesting on the album is award-winning singer Michael English.

Thank you so much for sharing our music!! God bless you!! ❤️