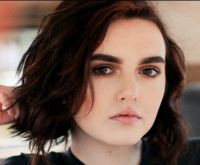 INTEGRITY MUSIC have released the debut single "Kerosene" by 16-year-old singer, songwriter and worship leader MDSN (Madison). She is the daughter of worship leaders David and Nicole Binion and serves on the worship team for the 10,000 member Covenant Church in Dallas, Texas. Read a press release, "Fusing pop, EDM and acoustic styles with worshipful, praise-field lyrics, MDSN has begun work on a new project set to release in early 2018. The 'Kerosene' single, produced by Kyle Lee and co-written by MDSN with Lee and Rhyan Shirley, offers a small taste of MDSN's joyful energy and the project to come."