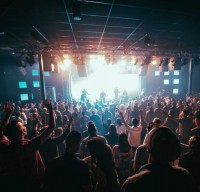 THE WORSHIP ministry of San Diego's C3 Church has its first national release in the US with 'Love So Wild'. The project, released under the name C3 Live and not to be confused with the C3 worship albums from Australia, is described as "a worshipful collection of upbeat dance pop anthems and ethereal ballads." It was produced by former Hillsong United drummer Luke Munns.