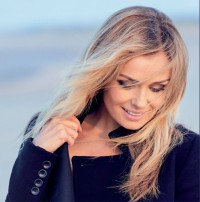 BRITAIN'S best-selling classical artist of the last 25 years, Katherine Jenkins OBE, will be releasing a new album, 'Guiding Light', on 30th November through Decca Records. The 15-song album contains such popular hymns as "Make Me A Channel Of Your Peace" and "Morning Has Broken", as well as "Never Enough" from The Greatest Showman, alongside original material including "Xander's Song", written for the newest addition to her family, her son born earlier this year. But the track on the album which will undoubtedly create major interest is the mezzo-soprano's cover of Stormzy's "Blinded By Your Grace".

The singer said, "I have a life now I don't think I ever expected to have. I am very happy, very blessed and I feel incredibly grateful. I feel whole new layers of emotion which have really taken me by surprise and made me feel like I have found myself, found my true voice. My voice has changed. This album is the most intimate album I have ever made. It's a mindful collection of songs. I'm not trying to prove anything, I'm not trying to show how many notes I can hit, I just want to take people to a place of emotion and reflection - to touch hearts and souls."