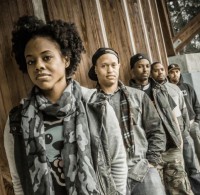 THE BAND led by former athletes, Run51, have released their second EP. The six-song 'This Moment' is a follow-up to 2015's 'We Are Run51'. Read a press release, "The group still has a heart for college athletes and performs around the country for UTC, Athletes In Action and Christian Athletes events because that's where it all began. However, they now use the universal languages of sport and music to reach the next generation of leaders no matter what they intend to go pro in."

For more on Run51 visit the Run51 artist profile