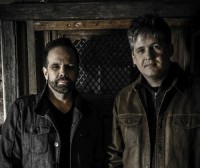 THE AMERICANA duo CO3, who released the album 'Determined' in 2007, have changed their name to Midwest Meets Manhattan and released two singles, "Restored" and "The Place", both produced by Sal Oliveri (Parmalee). After success with their debut album, the group put music on hold for a season, Dave Romero building Tru Church in Manhattan, Kansas, and Chad Little founding a leather goods company in Sallisaw, Oklahoma. Then, in 2017, the duo sang together for the first time in years. Midwest Meets Manhattan are currently in the studio recording new music, with additional singles to be released in early 2019.